Create A CI/CD Pipeline With Kubernetes and Jenkins

Through pipelines, you can ensure a smooth transition of code from the version control system to the target environment (testing/staging/production/etc.) In this article, we will build a continuous delivery pipeline to deploy a Golang application.

What Does CI/CD Try To Solve?

CI/CD is a term that is often heard alongside other terms like DevOps, Agile, Scrum and Kanban, automation, and others. Sometimes, it’s considered to be just part of the workflow without really understanding what it is or why it was adopted. Taking CI/CD for granted is common for young DevOps engineers who might have not seen the “traditional” way of software release cycles and, hence, cannot appreciate CI/CD.

CI/CD stands for Continuous Integration/Continous Delivery and/or Deployment. A team that does not implement CI/CD will have to pass through the following stages when it creates a new software product:

There is a number of shortcomings for the above workflow:

CI/CD solves the above problems by introducing automation. Each change in the code once pushed to the version control system, gets tested, and further deployed to staging/UAT environments for even further testing before deploying it to production for users to consume. Automation ensures that the entire process is fast, reliable, repeatable, and much less error-prone.

So, What is CI/CD Anyway?

Complete books have been written about this subject. The how, why, and when to implement it in your infrastructure. However, we always prefer less theory and more practice whenever possible. Having said that, the following is a brief description of the automated steps that should be executed once a code change is committed:

And What is a Pipeline?

A pipeline is a fancy term for a very simple concept; when you have a number of scripts that need to be executed in a certain order to achieve a common goal, they’re collectively referred to as a “pipeline”. For example, in Jenkins, a pipeline may consist of one or more stages that must all complete for a build to be successful. Using stages helps visualize the entire process, learn how long each stage is taking, and determine where exactly the build is failing.

LAB: Create a Pipeline For a Golang App

In this lab, we are building a continuous delivery (CD) pipeline. We are using a very simple application written in Go. For the sake of simplicity, we are going to run only one type of test against the code. The prerequisites for this lab are as follows:

The pipeline can be depicted as follows:

Our sample application will respond with ‘Hello World’ to any GET request. Create a new file called main.go and add the following lines:

Since we are building a CD pipeline, we should have some tests in place. Our code is so simple that it only needs one test case; ensuring that we receive the correct string when we hit the root URL. Create a new file called main_test.go in the same directory and add the following lines:

We also have a few other files that help us deploy the application, named:

This is where we package our application:

The Dockerfile is a multistage one to keep the image size as small as possible. It starts with a build image based on golang:alpine. The resulting binary is used in the second image, which is just a scratch one. A scratch image contains no dependencies or libraries, just the binary file that starts the application.

Since we are using Kubernetes as the platform on which we host this application, we need at least a service and a deployment. Our service.yml file looks like this:

There’s nothing special about this definition. Just a Service that uses NodePort as its type. It will listen on port 32000 on the IP address of any of the cluster nodes. The incoming connection is relayed to the pod on port 8080. For internal communications, the service listens on port 80.

The application itself, once dockerized, can be deployed to Kubernetes through a Deployment resource. The deployment.yml file looks as follows:

The most interesting thing about this deployment definition is the image part. Instead of hardcoding the image name and tag, we are using a variable. Later on, we shall see how we can use this definition as a template for Ansible and substitute the image name (and any other parameters of the deployment) through the command line arguments.

In this lab, we are using Ansible as our deployment tool. There are many other ways to deploy Kubernetes resources including Helm Charts, but I thought Ansible is a much easier option. Ansible uses playbooks to organize its instructions. Our playbook.yml file looks as follows:

Ansible already includes the k8s module for handling communication with the Kubernetes API server. So, we don’t need kubectl installed but we do need a valid kubeconfig file for connecting to the cluster (more on that later). Let’s have a quick discussion about the important parts of this playbook:

Let’s install Ansible and use it to automatically deploy a Jenkins server and Docker runtime environment. We also need to install the openshift Python module to enable Ansible to connect with Kubernetes.

Step 3: Configuring Jenkins User to Connect to the Cluster

As mentioned, this lab assumes that you already have a Kubernetes cluster up and running. To enable Jenkins to connect to this cluster, we need to add the necessary kubeconfig file. In this specific lab, we are using a Kubernetes cluster that’s hosted on Google Cloud so we’re using the gcloud command. Your specific case may be different. But in all cases, we must copy the kubeconfig file to the Jenkins’s user directory as follows:

Note that the account that you’ll use here must have the necessary permissions to create and manage Deployments and Services.

Create a new Jenkins job and select the Pipeline type. The job settings should look as follows: 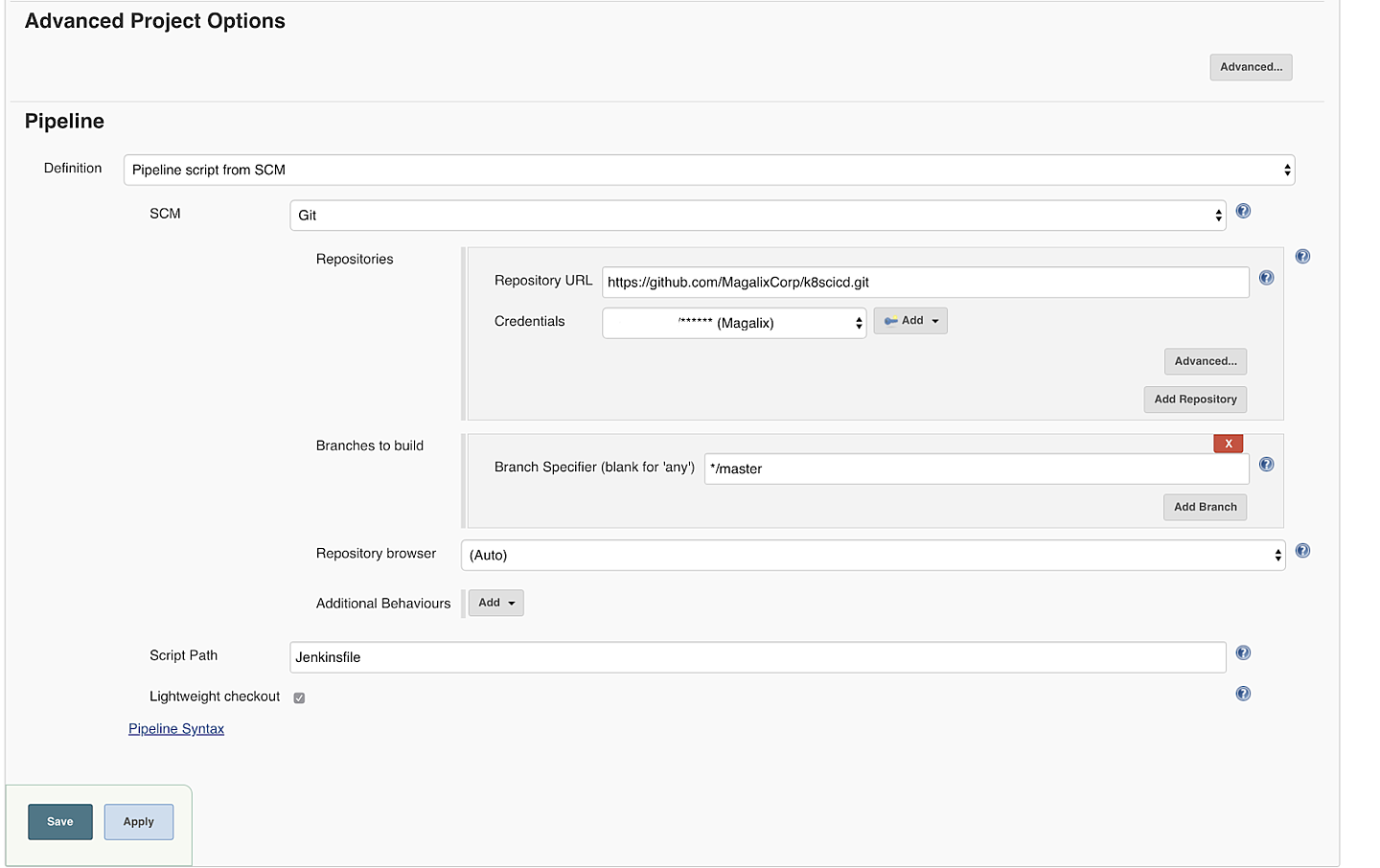 The settings that we changed are:

Go to /credentials/store/system/domain/_/newCredentials and add the credentials to both targets. Make sure that you give a meaningful ID and description to each because you’ll reference them later:

The Jenkinsfile is what instructs Jenkins about how to build, test, dockerize, publish, and deliver our application. Our Jenkinsfile looks like this:

The file is easier than it looks. Basically, the pipeline contains four stages:

Now, let’s discuss the important parts of this Jenkinsfile:

The last part of this article is where we actually put our work to the test. We are going to commit our code to GitHub and ensure that our code moves through the pipeline until it reaches the cluster:

Now, let’s initiate an HTTP request to our app:

OK, we can see that our application is working correctly. Let’s make an intentional error in our code and ensure that the pipeline will not ship faulty code to the target environment:

Change the message that should be displayed to be “Hello World!”, notice that we capitalize the first letter of each word and added an exclamation mark at the end. Since our client may not want the message to be displayed that way, the pipeline should stop at the Test stage.

First, let’s make the change. The main.go file now should look like this:

Next, let’s commit and push our code:

Back to Jenkins, we can see that the last build has failed: 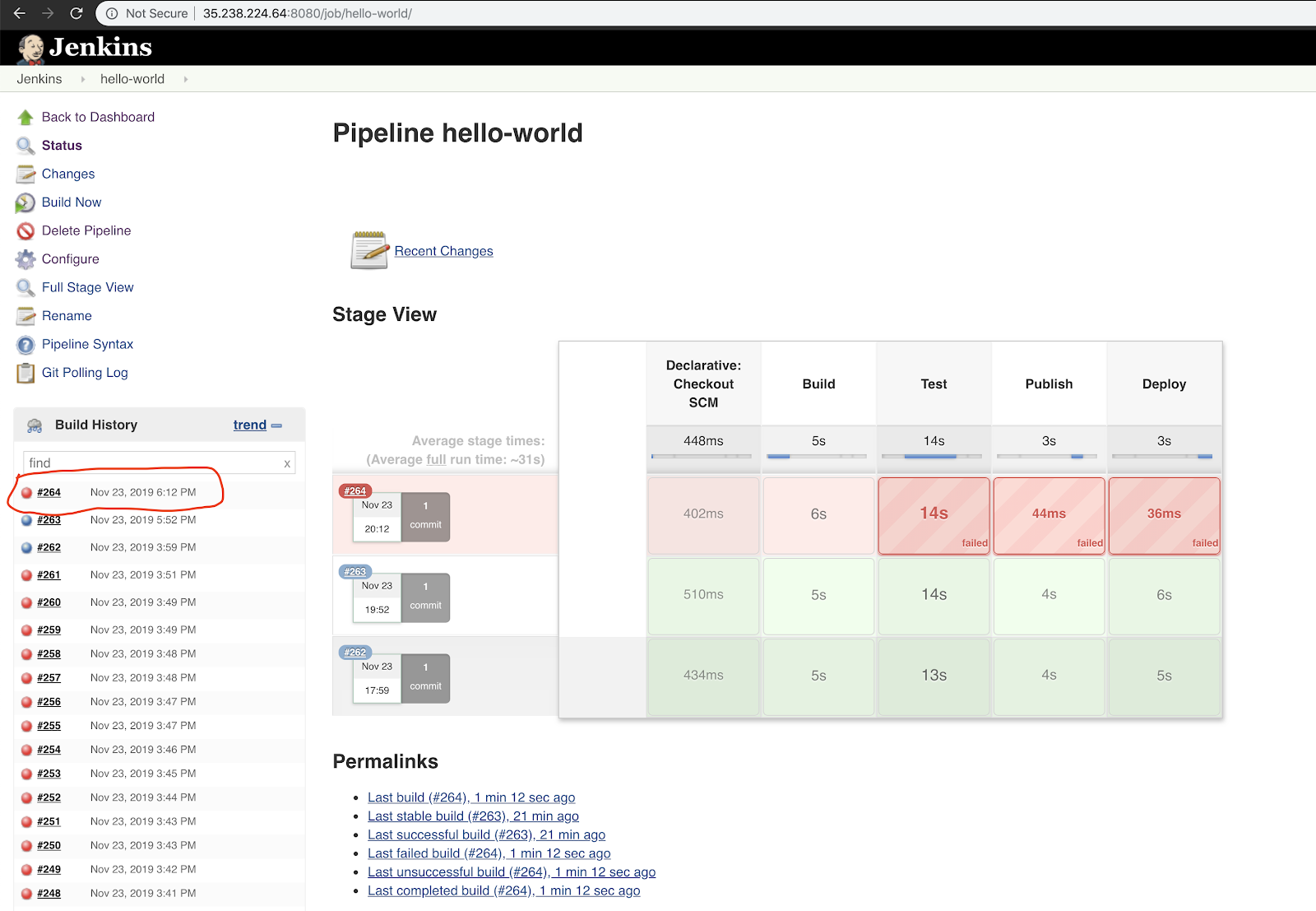 By clicking on the failed job, we can see the reason why it failed:

Our faulty code will never make its way to the target environment.