Watch Justin Cormack speak about the ins and outs of Linuxkit. Linuxkit provides a Docker-native experience in IT infrastructures that include a variety of OS’s which are not bundled with a native version of Linux... At the April 25, 2017 Weave Online User Group, Justin Cormack from Docker was our guest speaker and he talked about “Docker Linux Distributions that work with Kubernetes: LinuxKit”.

Justin gave an overview of LinuxKit, which was introduced and open sourced at DockerCon 2017.

LinuxKit started as a Docker Inc. internal project a few years ago when Justin Cormack was working on the “Docker for MacOS Desktop edition.” Initially available to Docker employees only, it was eventually launched outside of the company and made generally available to all Docker users.

Linuxkit provides a Docker-native experience in IT infrastructures that include a variety of OS’s which are not bundled with a native version of Linux. Providing a standard version of Linux where-ever users ran Docker containers is a one of the primary motivations behind the development of LinuxKit.

These were the requirements identified for LinuxKit: 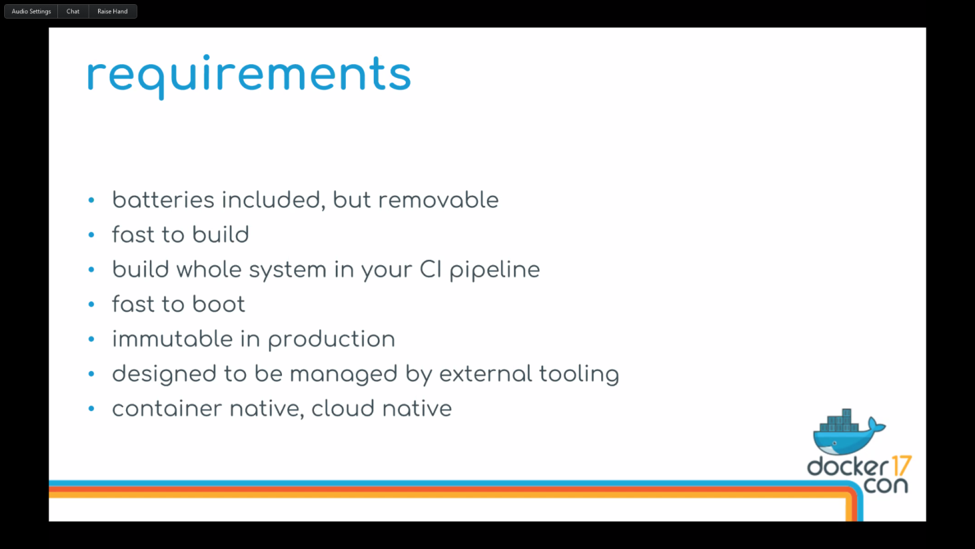 Being able to provide immutable delivery tops the list in importance and was a key requirement since the project’s inception. Solomon Hykes, founder of Docker Inc., summarized LinuxKit as “A secure, portable and lean OS built for containers” in his DockerCon 2017 keynote. 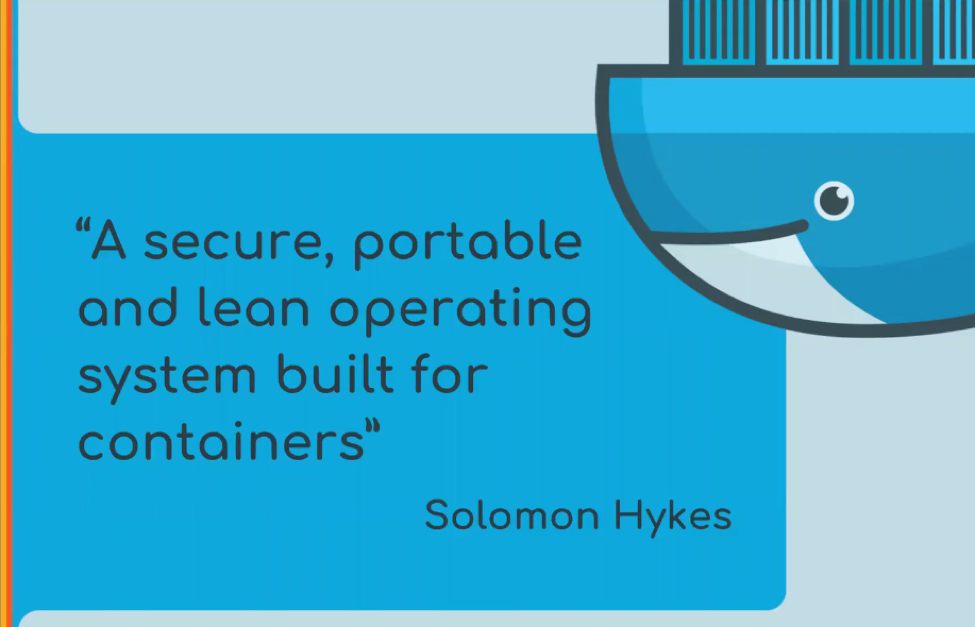 According to Justin, “Security is built-in for LinuxKit. Docker has been working on security aspects of this project right from the beginning.”

LinuxKit follows the NIST Application Container Security Guide where it suggests using a container-specific OS instead of general-purpose ones so that there are fewer opportunities for attacks that can compromise the OS.

This slide pointed out some of the ways how LinuxKit handles security: 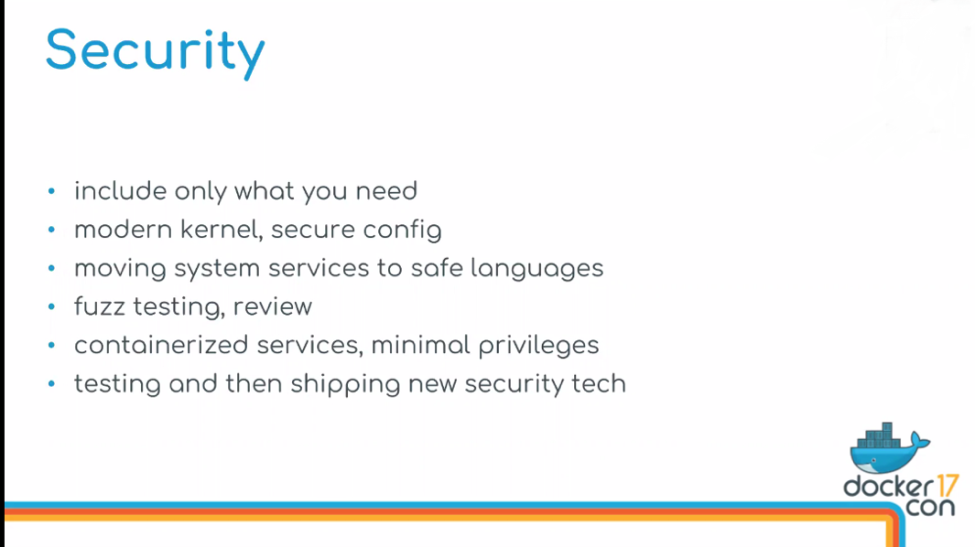 LinuxKit has a rich set of contributors that include IBM, Microsoft, Intel and many others. The wide range of contributors adds to its portability and helps achieve LinuxKit’s main goal which is to have a Linux system that runs on platforms that don’t include Linux.

Here are some of the contributors: 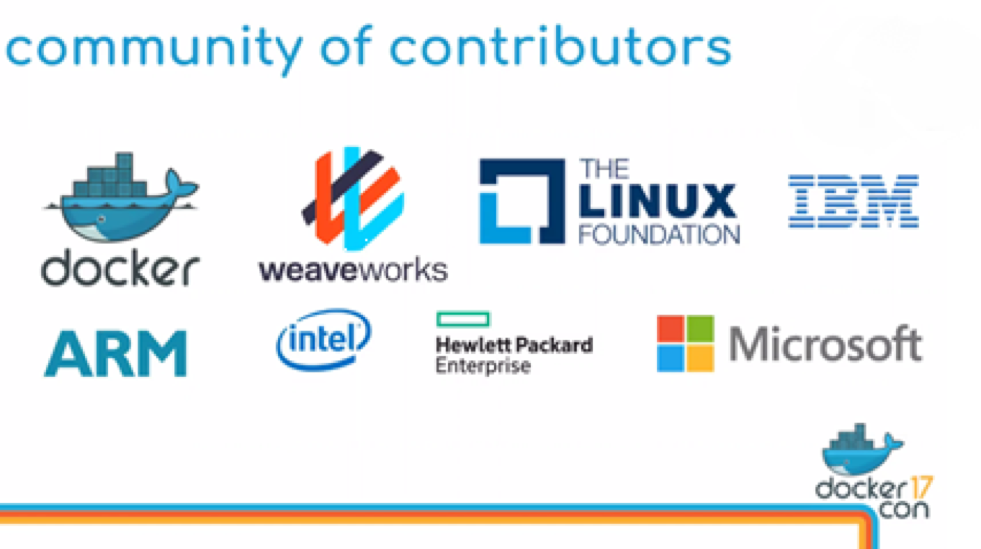 Here is the sample build YAML file that Justin used for the demo:

And finally we can see that containerd is managing the container lifecycle within the demo linuxkit binary: 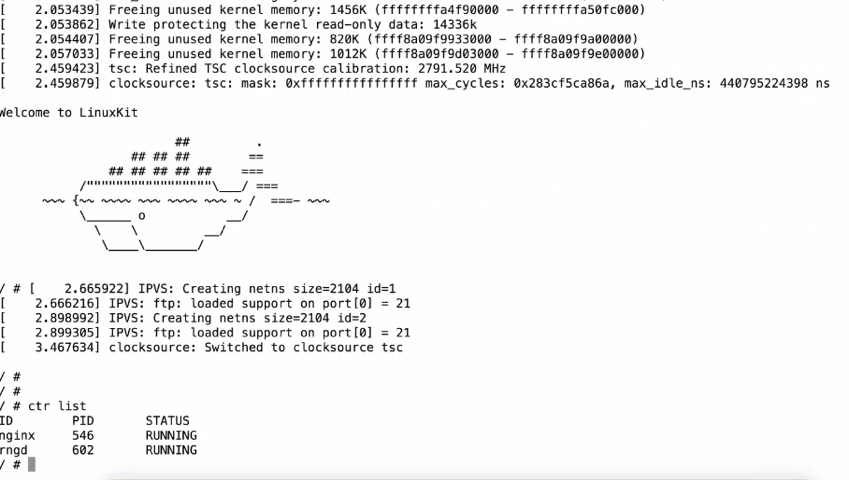 The status output shows nginx and rngd running. These services were specified in the services section of the linuxkit.yml file:

InfraKit is one cluster management tool that can be used to manage any infrastructure created by LinuxKit: 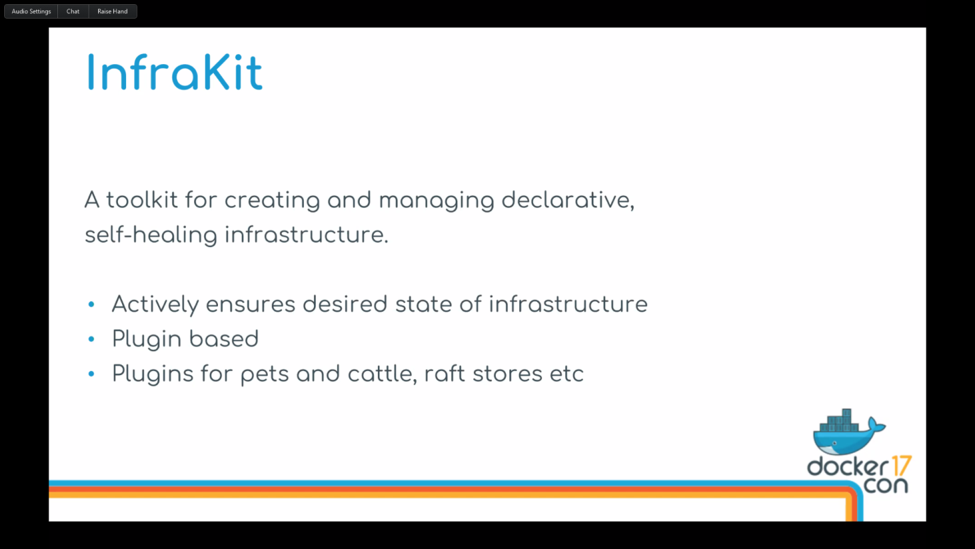 As stated in the slide, InfraKit is declarative, which means that users only specify the desirable state of the infrastructure. InfraKit runs the infrastructure as it was specified. For example,  if a container terminated, it spins up another one.

This slide displays an architectural diagram for InfraKit: 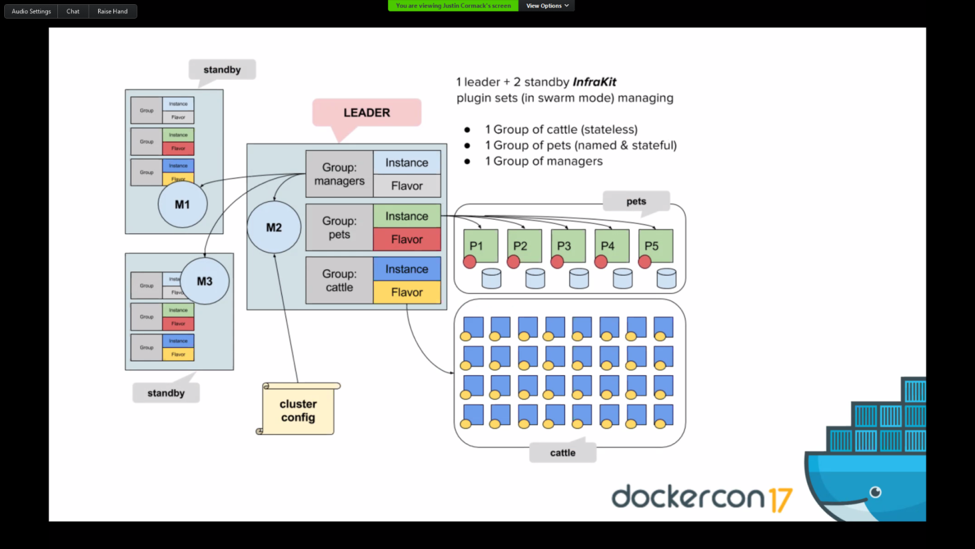 Future work will focus on different projects that can build with LinuxKit: 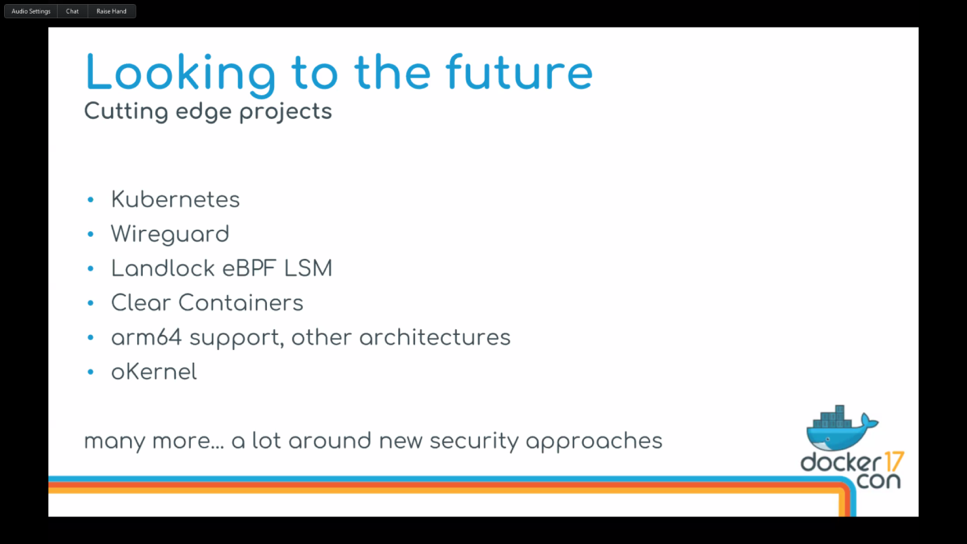 Support for different platforms is another area that needs further development: 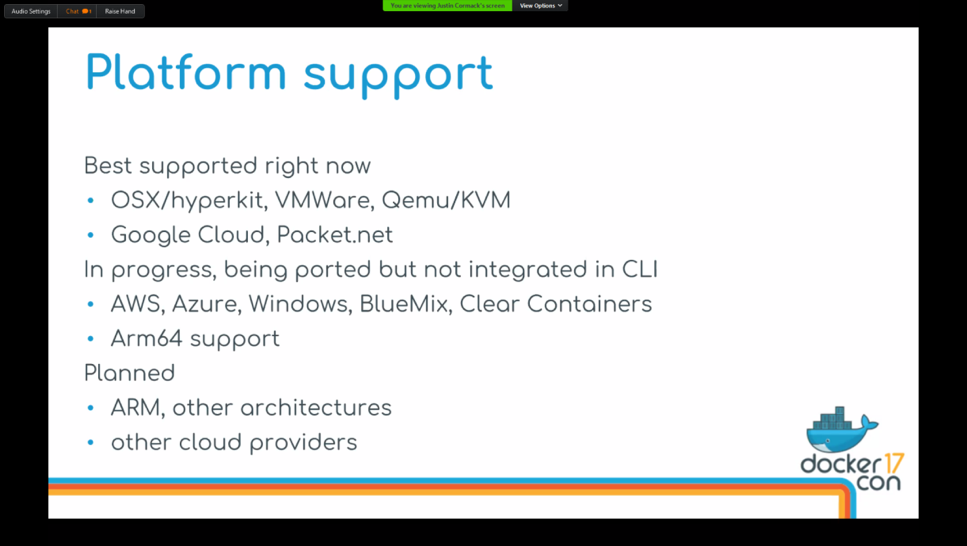 For more information check out the  LinuxKit project on Github.

Next up Ilya Dmitrichenko of Weaveworks introduced a project in the linuxkit tree on GitHub. He stated 3 advantages of using LinuxKit for Kubernetes: 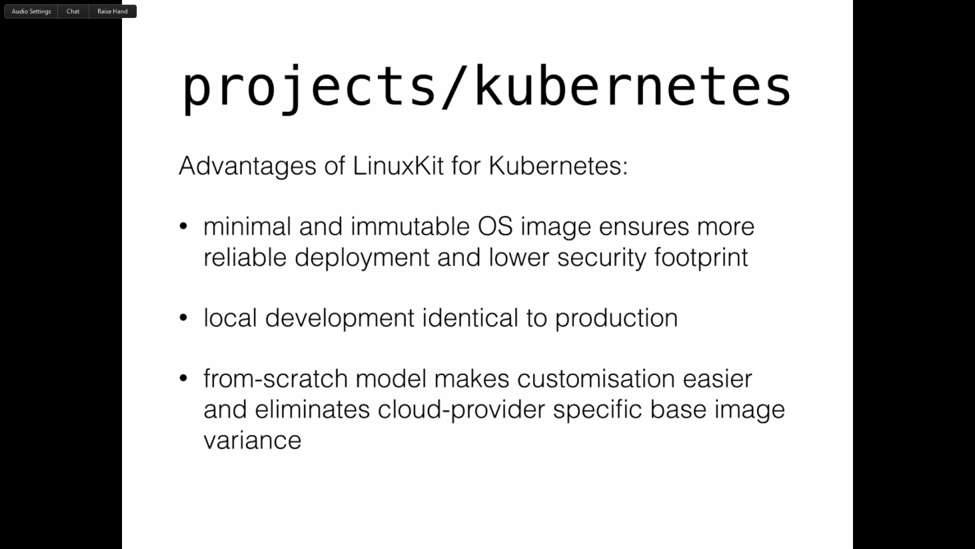 The biggest advantage of using LinuxKit for Kubernetes is that it eliminates the cloud provider-specific base images variance or lock-in to a specific Linux distribution. With a from-scratch model to generate the base image, the cluster can run identically on different on-premise or cloud platforms.

Ilya then followed up with a demo based on the instructions on LinuxKit for Kubernetes. He spun up a Kubernetes master and a few worker nodes: 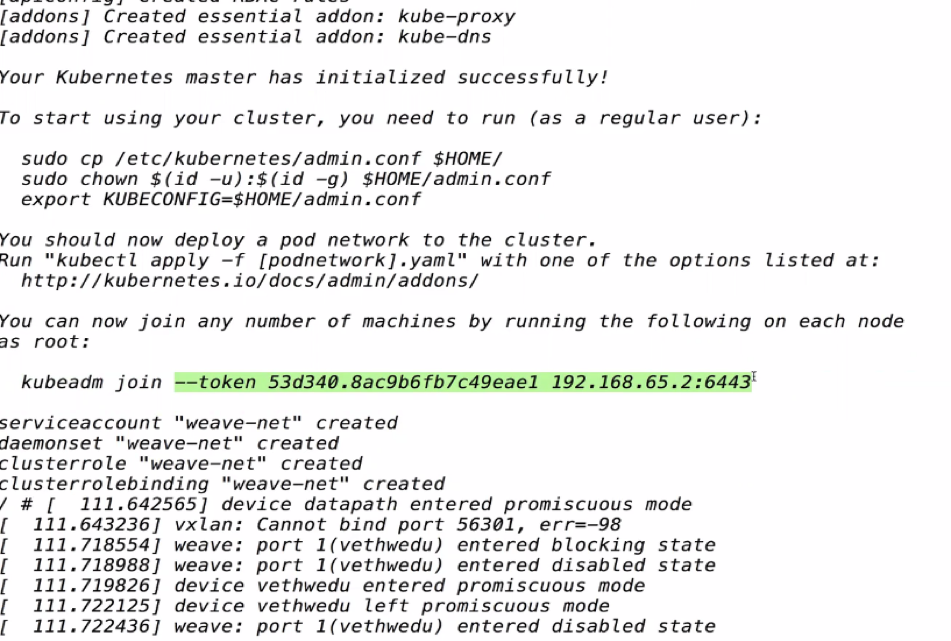 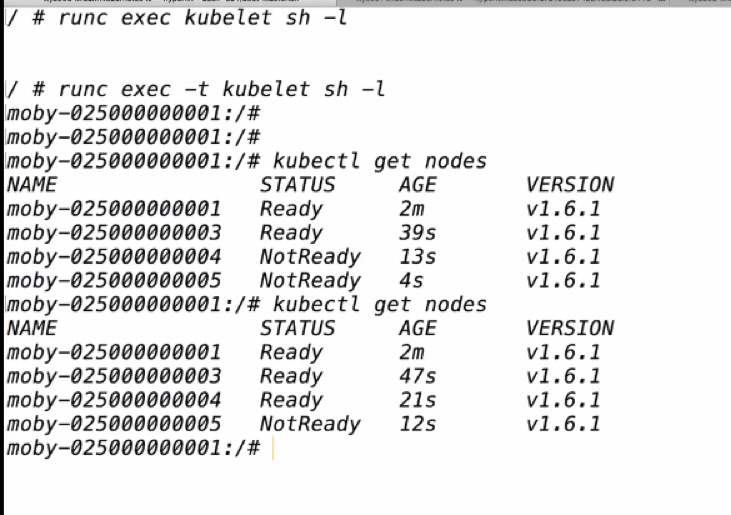 After the watching to ensure that all of the pods successfully joined the cluster, Ilya went over the kube-master.yml file that defined the build parameters for LinuxKit. To speed up the demo these two containers were added to the YAML file:

Ilya as part of the Weaveworks’ DX team was also a central contributor to this project. He assisted in demonstrating how LinuxKit can be used with Kubernetes, which he also presented at DockerCon 2017 in Austin with Justin Cormack.

See the video of the talk here:

Next
Kubernetes
Product Features
How To

Next
Kubernetes
Product Features
How To