Read how GitOps workflows can be implemented to rollout and manage non-atomic canary releases to an Istio service mesh. Stefan Prodan then takes you through the steps of setting up a canary with GitOps workflows to Istio.

Follow this tutorial and learn how to control and manage a canary deployment to Istio using GitOps workflows.

Canary deployments or releases are used when you want to test some new functionality with a subset of users. Traditionally you may have had two almost identical servers: one that goes to all users and another with the new features that gets rolled out to only a set of users.

But by using GitOps workflows, your canary can be fully controlled through Git. If something goes wrong and you need to roll back, you can redeploy a stable version all from Git. An Istio virtual gateway allows you to manage the amount of traffic that goes to both deployments. With both a GA and a canary deployed, you can continue to iterate on the canary release until it meets expectations and you are able to open it up to 100% of the traffic.

In this scenario, you will have two different manifests checked into Git: a GA that is tagged 0.1.0 and the canary, tagged 0.2.0. You will then use Git and Weave Cloud to automate the deployment of patches for these releases. By altering the weights in the manifest of the Istio virtual gateway, the percentage of traffic for both of these deployments is managed.

Finally you will use Weave Cloud to automatically detect and deploy the new patches for the GA and the canary to your cluster. You will then monitor the canary release for performance through the request latency graph presented by Weave Cloud. 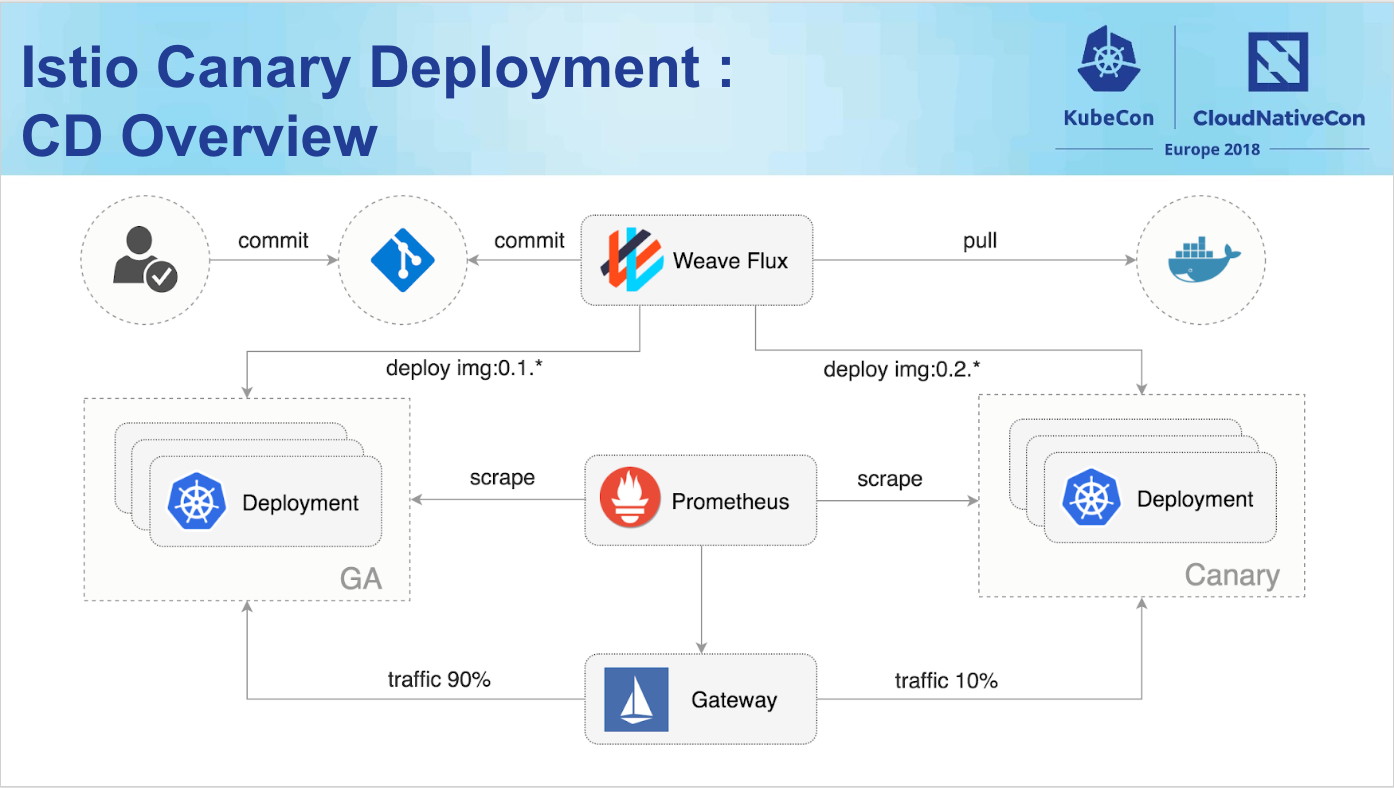 GitOps Workflows for the continuous deployment to Istio:

Once the Canary is fixed, keep increasing the traffic to it and shift the traffic from the GA deployment by modifying the weight setting and committing those changes to Git. With each Git push and manifest modification, Weave Cloud detects that the cluster state is out of sync with desired state and will automatically apply the changes.

If you notice that the Canary doesn't behave well under load, revert the changes in Git. Weave Cloud rolls back the weight setting by applying the desired state from Git on the cluster.

You can keep iterating on the canary code until the SLA is on a par with the GA release.

To run through this tutorial for Istio canary deployments you will need the following:

#1. Setup a Kubernetes cluster in your choice of cloud provider.

In this tutorial, we use Google Kubernetes Engine (GKE) on the Google Cloud Provider (GCP) who provide an extremely easy way to spin up Kubernetes in minutes. You can use the free tier.

#3. Install Istio to the new cluster.

Add the istioctl client to your PATH:

Set the caBundle in the webhook install YAML that the Kubernetes api-server uses to invoke the webhook:

#5. Install the Weave Cloud Agents to your cluster and connect your Git repo to Weave Cloud.

Sign up to Weave Cloud and install the agents:

Now you need to complete the Deploy setup and connect your Git repo to Weave Cloud:

Once everything is setup correctly, click Deploy to see your repo: 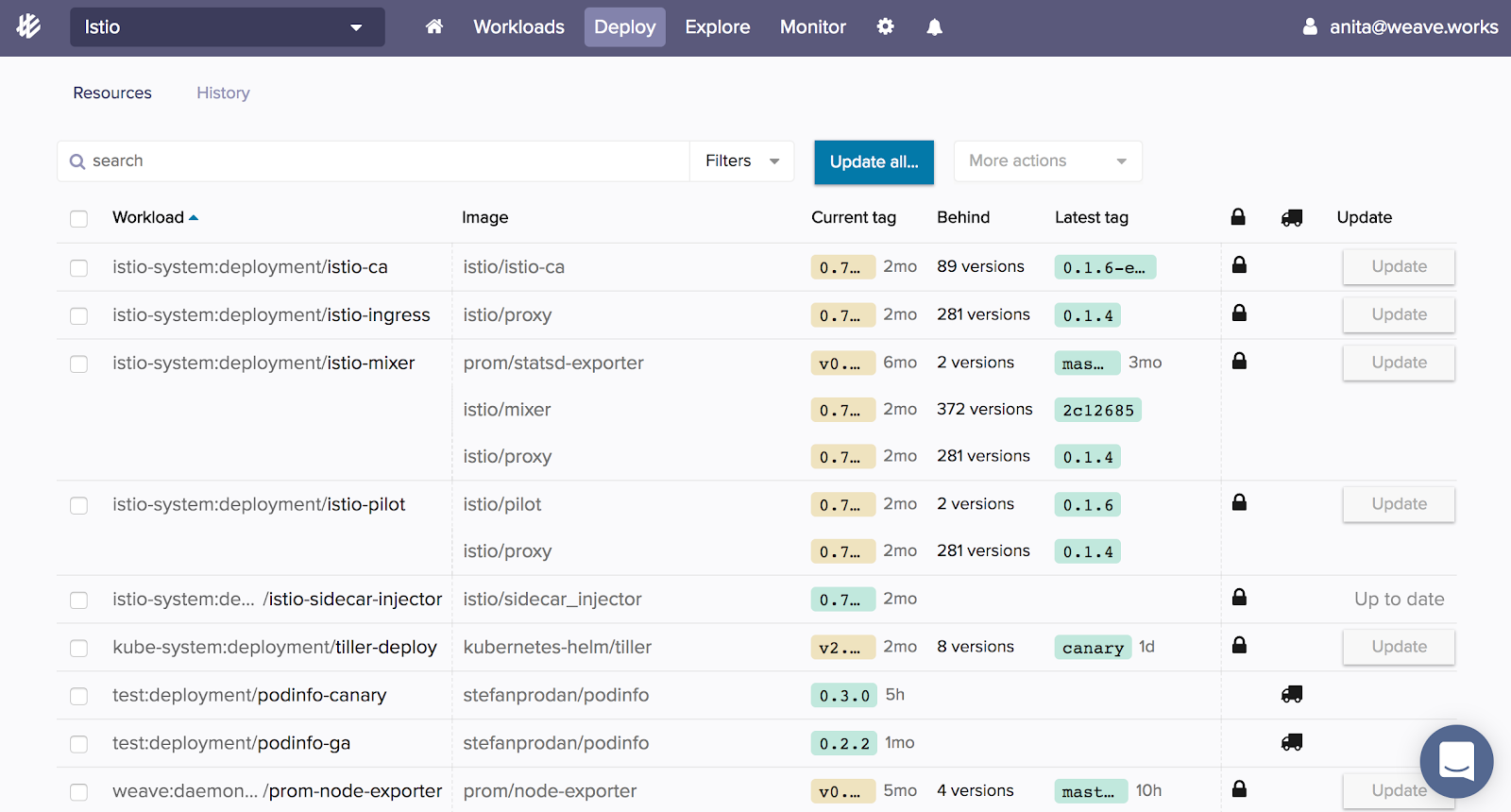 When you’ve connected to your repo, any manifests that Weave Cloud finds are deployed automatically to the cluster. Go to the explore section and select the namespace ‘test’ to see all of the services in the cluster.

The namespace definition is included in the manifests and when deployed by Weave Cloud, it creates the test namespace in the cluster.

It is the equivalent of running the following on the cluster:

Also the podinfo ga and canary deployments were automatically deployed by Weave cloud:

And the istio destination rules, the virtual service and its gateway were applied with:

To add some traffic to your canary tests, run the following in the GKE terminal:

#8. Run the GA and canary deployments

To begin with all of the traffic is routed to the GA deployment:

Edit the manifest (podinfo-canary.yaml) for the canary deployment by route 10% of the traffic to it and commit the change to Git:

Once the image has built, deploy it through the GUI in Weave Cloud by filtering on tags and then selecting the podinfo-canary image (if you don’t want to do this manually, set the workload to auto-deploy): 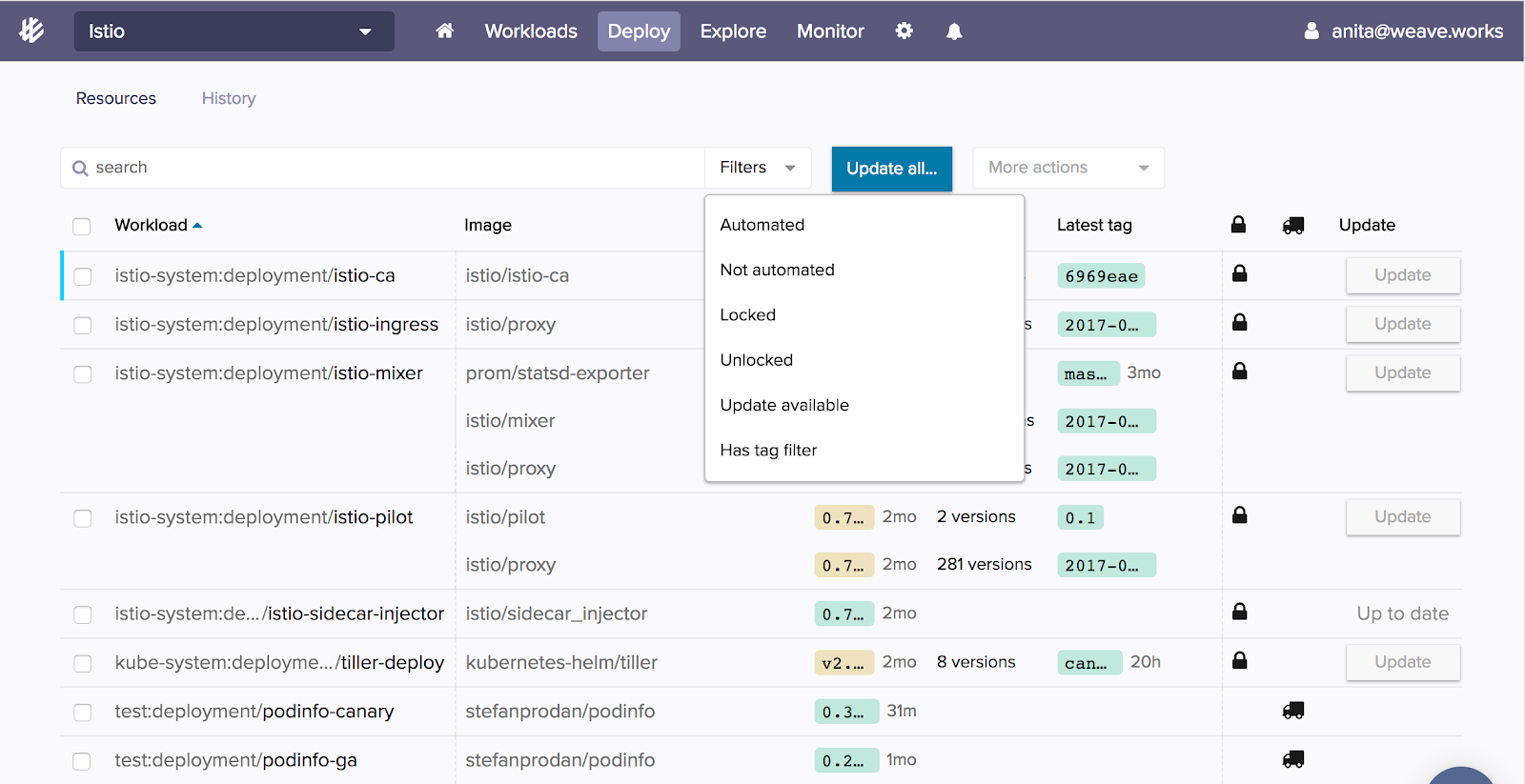 Click on one of your workloads where you’ll see the dry run screen: 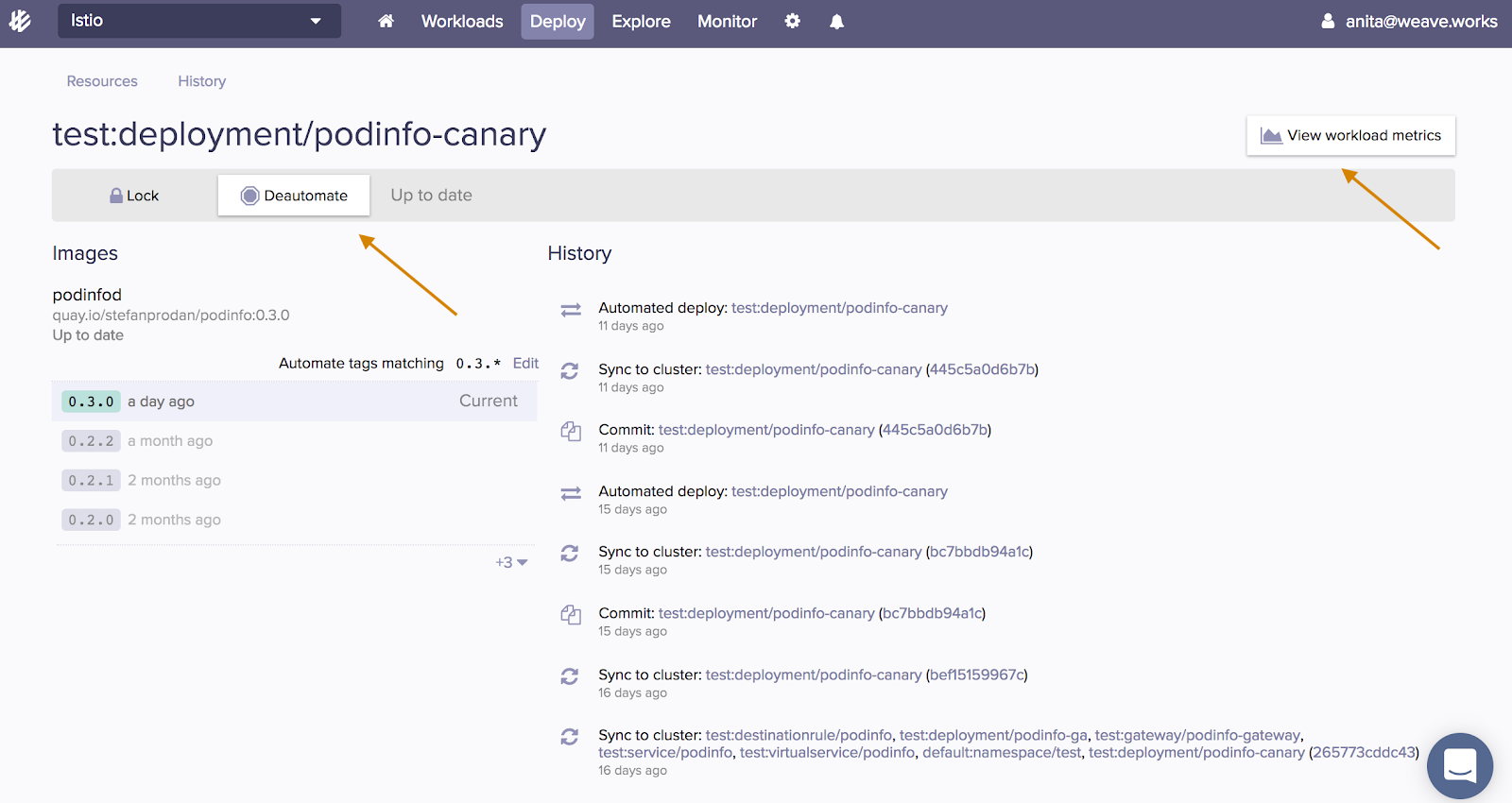 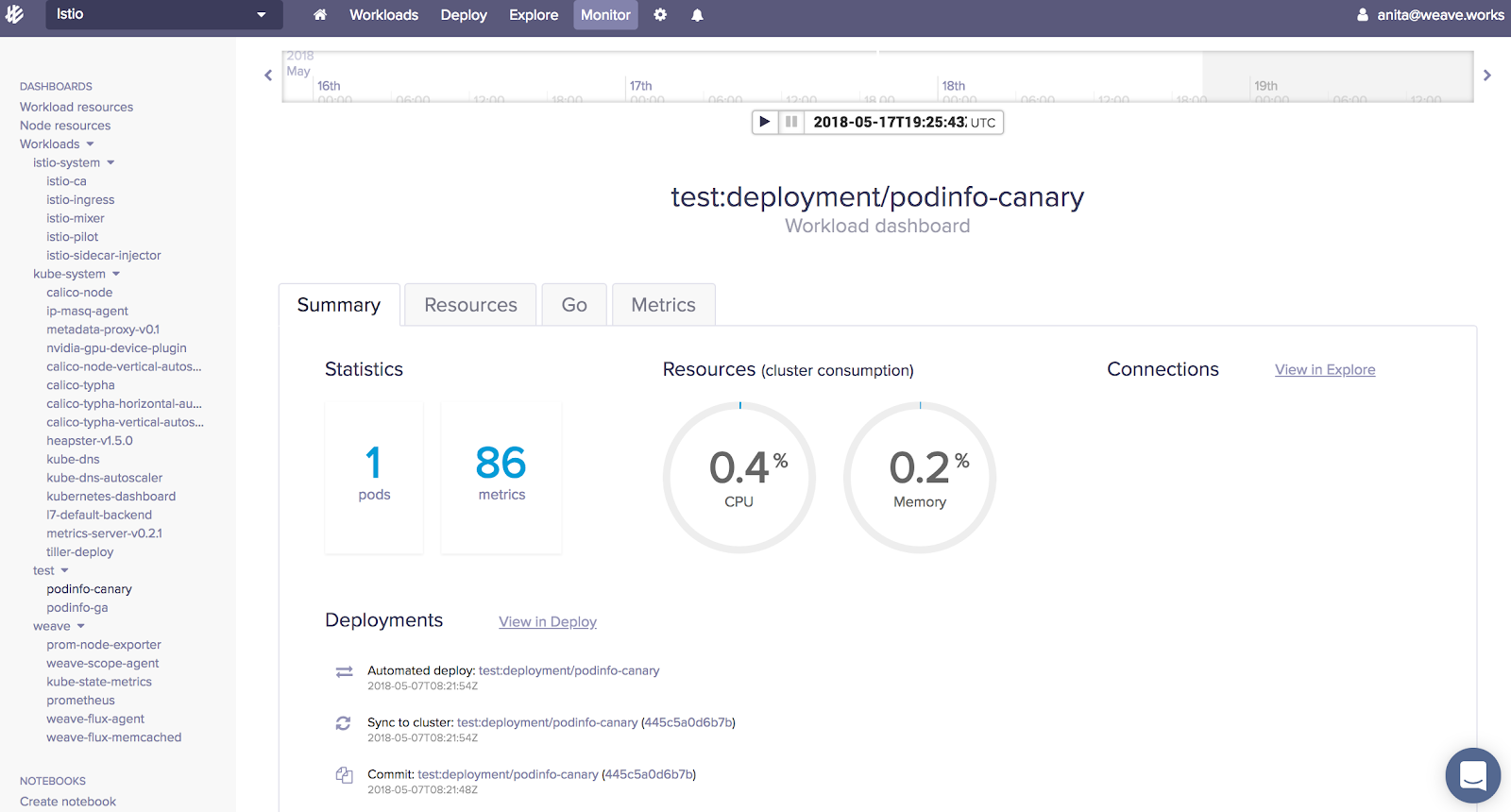 Monitor the traffic from Weave Cloud’s built-in instant dashboards. Select the ‘test’ namespace from the dropdown. 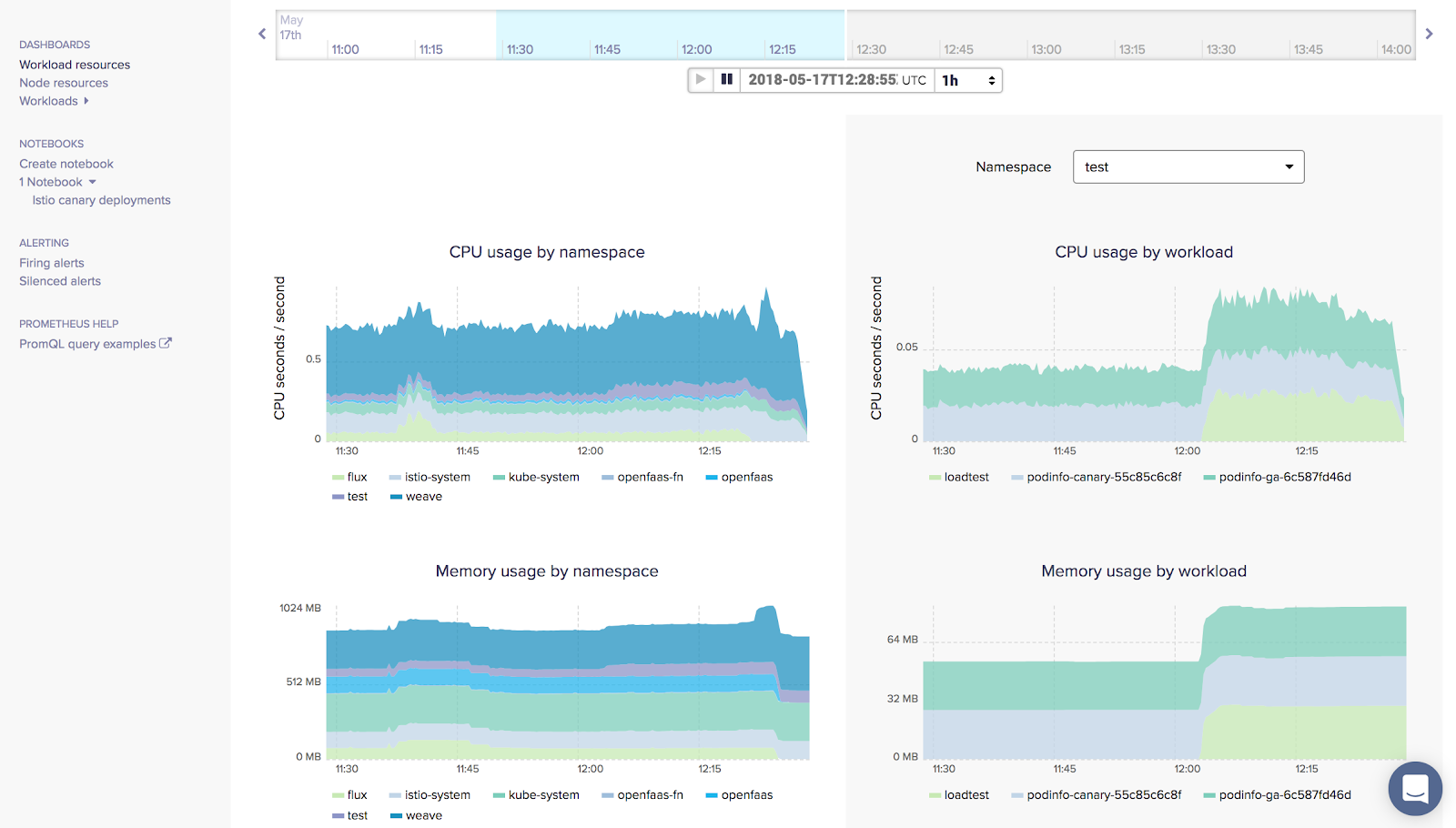 Increase the canary traffic to 60% and again commit the change:

Add the following PromQL to view total requests for the canary vs ga:

Full promotion, 100% of the traffic to the canary:

Measure requests latency for each deployment in Weave Cloud:

Add the promQL to see latency between the two deployments:

This tutorial demonstrated how to rollout and iterate on a canary deployment running on Istio using GitOps workflows and Weave Cloud.

To read more about GitOps see our four part series on the topic, or read our "GitOps - what you need to know" page.