Helm is a package manager for Kubernetes that allows you to recount the structure of your application through Helm Charts. Read this blog to learn more about Helm.

Profile Layering for Helm Encourages Self Service for Kubernetes

It’s 2015 and after being in the community for over a year, Kubernetes has finally had its first general availability release. It is a plug-and-play platform ‘for platforms’ that makes it extremely popular in the cloud-native ecosystem. But now, dealing with Kubernetes objects can easily become complex. This has led to the need to start orchestrating multiple Kubernetes configuration files.

Typically, an application deployed on Kubernetes has objects such as deployments, configmaps, vertical and horizontal pod autoscalers, ingress, secrets, services, pods, etc. And everything is defined using YAML files, given its declarative nature. Now, every environment requires its own set of YAML files, which again require maintenance.

That’s when we use Helm — the most widely accepted tool to manage software built for Kubernetes and developed by a community of 400+ developers. In this article, we will dive deeper into what Helm Charts are and how they fit into the Kubernetes workflow, and how you can benefit from them. 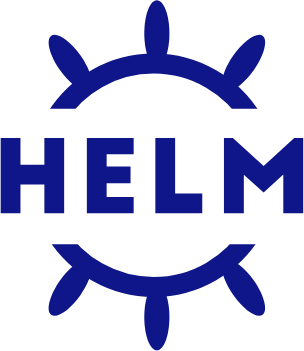 What is a Helm Chart in Kubernetes?

Created initially by Deis Labs and later donated to CNCF, Helm is an open-source project with the original goal to help provide users with an easier way to manage all Kubernetes YAML files.

To better solve this issue, Helm Charts were created. Each Helm Chart is a bundle with multiple Kubernetes manifests which means a chart can have child charts and charts dependent on it. In short, Helm can install the entire dependency tree of your project from a single install command for the top chart.

With Helm Charts you can go all the way from defining to installing and upgrading complex Kubernetes applications. You can version your manifest files too, meaning you can install specific chart versions stored in the form of code. Plus, Helm maintains a release history of all deployed charts, so you can revert the changes if something goes sideways.

Furthermore, you don’t have to write any new syntax files to start using Helm since it supports Kubernetes natively.

Why should you use Helm?

Package managers like Homebrew, Chocolatey, and yum are commonly used to install new software but Helm is the only package manager with specific support for Kubernetes applications. Once you package your applications as a Helm Chart, you can install, update, and roll back your applications with a few commands. For starters, you can even make use of some of the pre-packaged, production-ready charts for well-known software apps like MySQL, NGINX, and MongoDB from ArtifactHUB or Bitnami. But there are many factors that make the Helm architecture superior.

The initial versions of Helm had a client-server architecture that needed separate installations. It had the CLI on the client side and a component called Tiller on the server side (which was later removed for certain security reasons). Helm v3, now, is a client-only utility and has numerous benefits, including:

With different objects being tightly coupled with each other, deploying applications isn’t a simple process. Unless you know the specific purpose of each object, it can get extremely difficult to make a successful deployment. Helm helps minimize that complexity.

When you create a new Helm Chart, you must follow a certain structure. First off, you run the helm create <chart-name>. Once the chart is created, the file structure looks like this:

The .helmignore contains all the files that will be ignored when the chart is packaged. It is the Helm’s equivalent of Git’s .gitignore file.

The chart.yaml is where you will store all the information related to your chart. This includes the name, the chart version, and the description (which can be viewed if published in an open repository). Additionally, using the dependencies key, you can define all the external dependencies.

The values.yaml file contains default values that will be used for variables. It is the Helm equivalent of Terraform’s variable.tf file.

If your chart has dependencies on charts other than the ones belonging to Helm’s default library, you can include its structure inside the charts/ directory. As chart dependencies are installed from the bottom all the way to the top chart, you must install the independent chart first and then the ones that rely on it in that order.

templates is another directory where you place your manifest files to be deployed alongside the chart. Everything here will be later passed on and created in Kubernetes. For instance, you might have an application deployment that needs secrets, a configmap, and a service. All the yaml files for secrets, configmap, service plus the config.yaml will be placed in template dir and get their values from values.yaml as mentioned above.

How to create and use Helm Charts in practice?

The best way to start using Helm is to experiment with a simple example, but first, let’s install Helm with a simple command (for macOS):

You can use other package managers like Chocolatey or APT too for installing Helm on Windows and Linux respectively. Next, you can use Helm’s installer script for downloading the latest version:

Once you have installed Helm in your OS, you may verify the installation with the helm version command which will give you detailed build information. 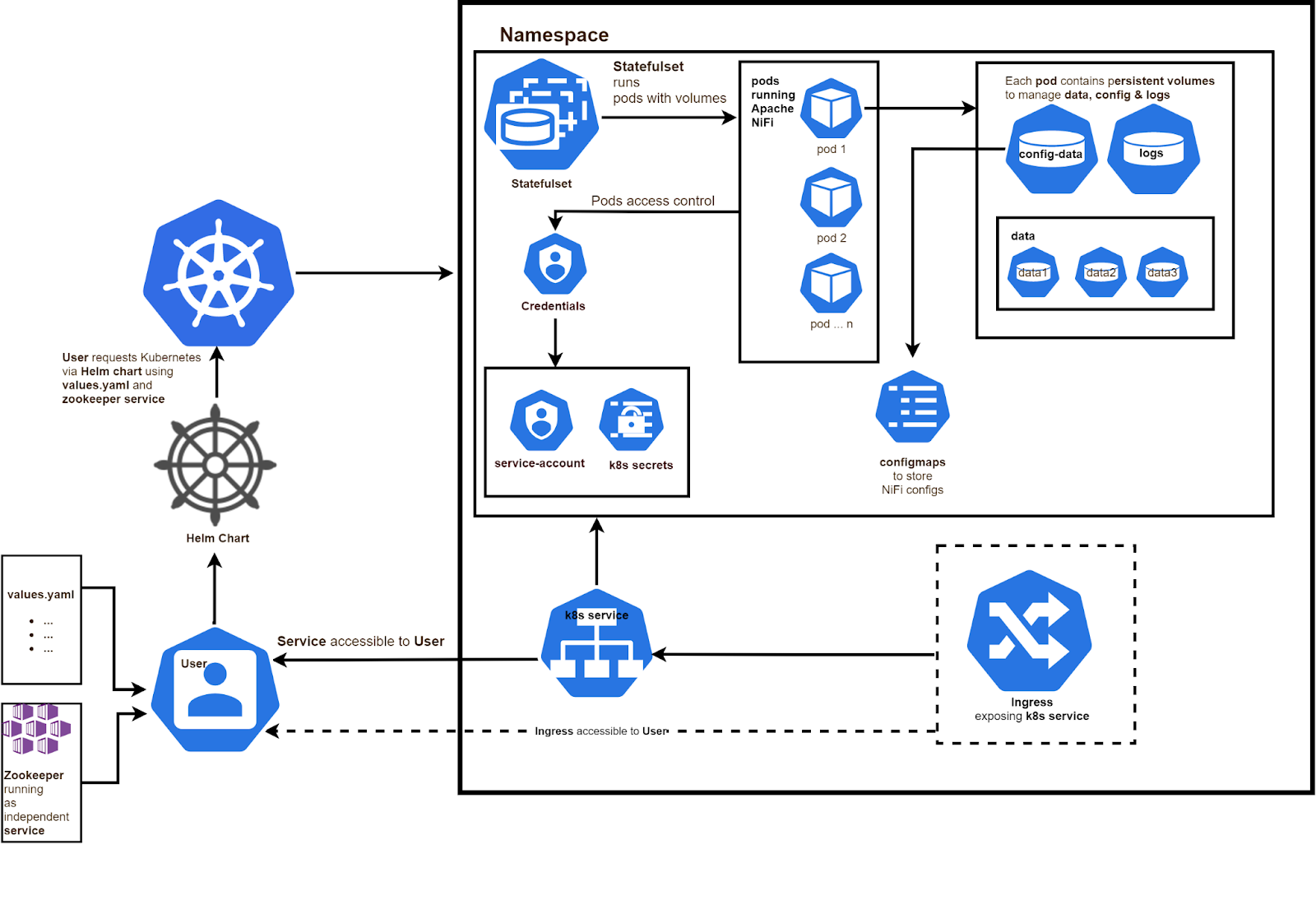 Of course, to run Helm, you must have a Kubernetes cluster. If you have one already, use it, or set up a local cluster. Next, let’s install NGINX using a Helm chart that’s pre-packaged and already available. The following command can be used to look for the chart in your local repository:

If you get a warning about the bitnami repository being corrupt or missing, update it using ‘helm repo update’ which will update your chart repository post which you will have to rerun the search command above. Once you are able to see bitnami/nginx in the list, enter the following command:

Now, there are multiple you can specify the chart you wish to install:

You can later verify the installation by running the kubectl get all command. If the installation went through well, the output from the above command would show you the service, pod, deployment, and replica set Helm has created.

By running the helm list command, you can view all the releases that have failed or have been deployed. And if you’re using minikube as a local Kubernetes cluster, you can use the minikube service nginx command to gain external access to the service.

The URL you get from the output of the previous command will lead you to your application.

Hereon, you can create Helm charts specific to your application using the helm create command.

Weaveworks helps enterprises across industries to gain cloud agility and deliver more customer value with GitOps. To that end, we have created numerous open-source tools including Flux, Flagger, and the Helm Controller. You can use Flux and Flagger to help deploy apps with feature flags, canaries, and A/B rollouts. Flux works with all prominent Git providers and can support all Kubernetes tooling including Kustomize, RBAC, and Helm.

Helm-controller, on the other hand, is a Kubernetes operator that you can use to manage all your Helm chart releases declaratively. Being a part of the GitOps toolkit, it relies on source-controller to get all the Helm Charts you may need from the existing Helm repositories. Plus you can use it to stay on the lookout for HelmRelease objects as well as generate Helm Chart objects. 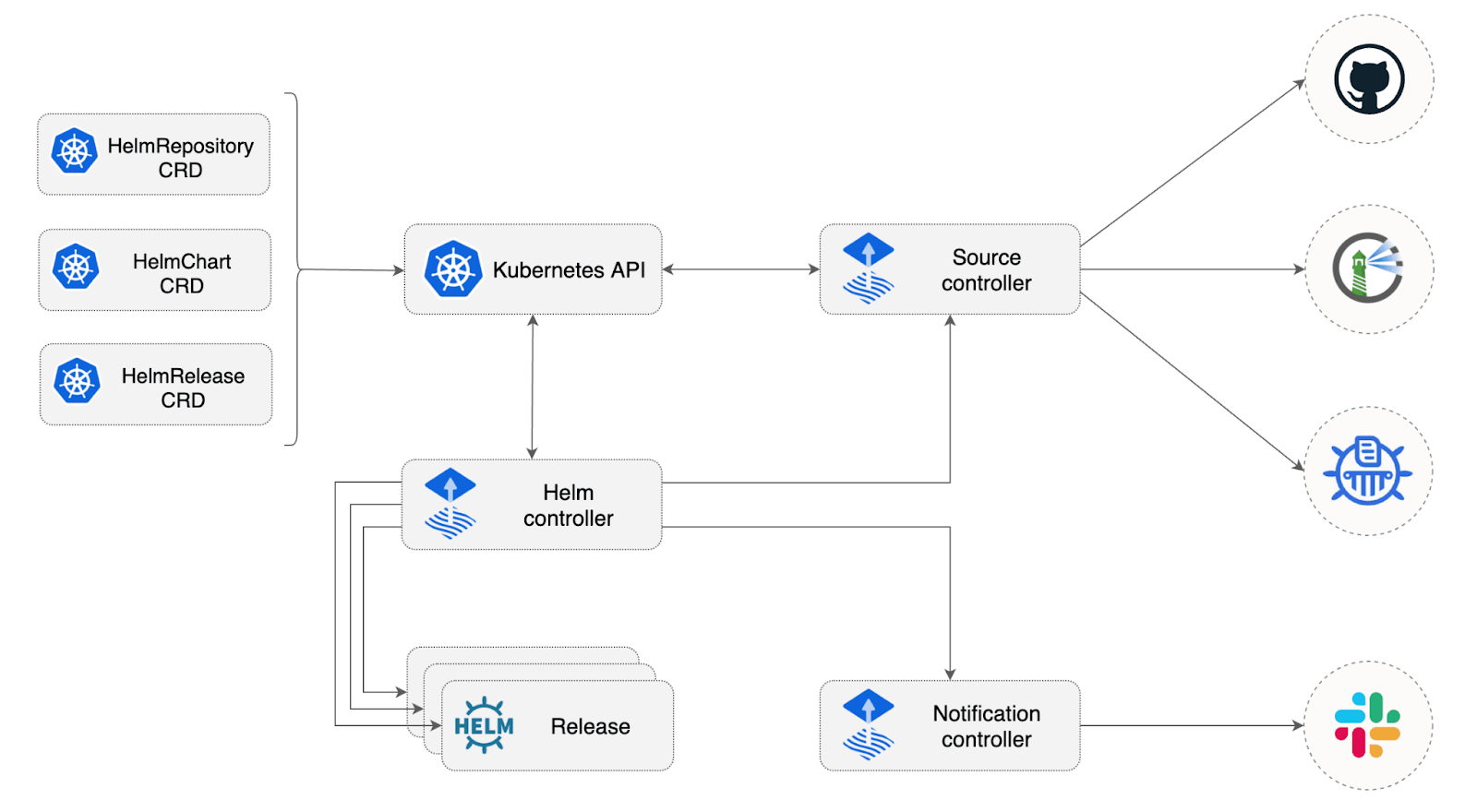 Helm-controller also supports HelmChart artifacts that are produced from Bucket sources and GitRepository sources. Using it, you can even automate various Helm actions such as testing, uninstalling, rollbacks, etc, and use its auto-remediation feature in case a Helm install/upgrade command fails.

For a long time teams have relied on Kubernetes YAML files to configure and manage their workloads. These YAML files require every bit of specific information for deploying containers. And there’s a unique YAML file for every workload. Helm helps with all that but it’s important you don’t lose sight of the bigger picture.  As a DevOps professional, you need to understand the extent of flexibility a tool gives you so your project delivery timeline isn’t sidetracked.

Given its popularity and exhaustive list of features, learn more about how Helm Charts benefit your business and how Weaveworks can help. Request a demo now!

Profile Layering for Helm Encourages Self Service for Kubernetes

Learn more about managing production-ready clusters and how to accelerate software delivery.