Introduction to EKS + EKSctl with Michael Hausenblas and Ilya Dmitrichenko

More than just a CLI for cluster creation, EKSctl can manage and configure an entire cluster with GitOps. Anyone using Kubernetes in production knows the importance of configuration management. Join Michael Hausenblaus (@mhausenblas) of AWS and Ilya Dmitrichenko (@errordeveloper) of Weaveworks for an online webinar on September 3rd.

EKSctl is now the official command line interface for Amazon’s managed Kubernetes service, EKS. "We decided, instead of building our own, to embrace EKSctl as part of the EKS planning cycle, and to encourage others to contribute to it as well – and we’ve been happy we did!," wrote Bob Wise, General Manager of AWS EKS in a recent post over on the AWS open source blog.

Why is this such big news? The answer is ease of use and automation. Rolling out Kubernetes in your organization requires you to reduce complexity and to automate as much as possible. If you have never used EKSctl and are wondering why it has become popular, there are two fundamental answers:

More than just a CLI for cluster creation, EKSctl can manage and configure an entire cluster with GitOps. Anyone using Kubernetes in production knows the importance of configuration management. Even though there are multiple ways to solve this problem, many DevOps engineers and SREs using Kubernetes today have adopted GitOps as a way of automating Kubernetes. 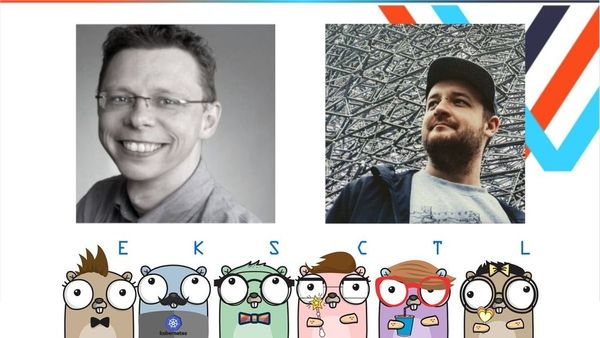 Michael Hausenblaus of AWS and EKSctl creator, Ilya Dmitrichenko of Weaveworks (@errordeveloper), will walk you through the basics of Amazon EKS with EKSctl, and why many EKS users have come to rely on EKSctl for the initial provisioning of new clusters and ongoing configuration management of clusters.

We will cover use cases, such as how to get started, some common pitfalls to avoid, and how to migrate from DIY Kubernetes on AWS (eg. Kops) to EKS with EKSctl.

Michael is a Developer Advocate at AWS, part of the container service team, focusing on container security. Michael shares his experience around cloud native infrastructure and apps through demos, blog posts, books, and public speaking engagements as well as contributing to open source software.

Ilya is a Software Engineer at Weaveworks, focused on making Kubernetes work for a wide range of users. Having started contributing to Kubernetes project from the early days in 2014, Ilya has focused his attention on cluster lifecycle matters, networking, observability as well as developer tools.

Please Register in advance for this event.

Automating the Operation of Stateful Apps in Kubernetes with GitOps

Automating the Operation of Stateful Apps in Kubernetes with GitOps