Read about our new Weave Cloud feature that lets you promote workloads between clusters. Find out how this can help your team accelerate the delivery of features to Kubernetes.

Weave Cloud has introduced a new feature called, Promotions, which is a step that’s integral to Continuous Delivery pipelines. This enables users to promote workload(s) in a multi-stage pipeline.

What is a “Pipeline”?

As we move towards progressive delivery, pipelines help developers and operators create and visualize the flow of workloads from source code to running in production clusters. Configuring pipelines can be done via a GitOps workflow model.

A workload is changed in the git repo and after a PR, the initial stage of a pipeline is triggered which starts moving through various stages of a pipeline. It allows developers and operators to interact with it at any time, at any stage (single or multi environments) and understand what’s happening with this workload, even after its fully operational.

Promotion allows developers and operators to manage single or multiple workloads and  “promote” them from one cluster to another - either automatically or manually. The workloads can be be promoted as individual containers, groups of containers - single or multiple (batch) workloads in a single promotion. The promotion of workloads are one or more steps towards a GitOps CD pipeline. Controlled promotion of workloads enables users to take actions during various stages of the pipeline. An example: execute a set of tests before promoting from Stage to Production.

Promotion of code from one environment to another has been around for a while and is used by operators to control what goes into production. It’s time we brought promotion into the modern age of software development where development teams in collaboration with operators own the pipeline all the way to production. To get here, a level of trust needs to be established so that DevOps teams and Operators can enable their developers to own the pipelines for each workload.

Managing Promotion within Pipelines is Complex

A developer can easily deploy a single workload to their minikube or dev cluster via the CLI. However, if you are part of a development team that is working with microservices divided among many workloads, it’s difficult to know what’s going on with multiple workloads being deployed at various times to any cluster in any cloud. Visualizing the workflow in a pipeline gives both operators and developers the confidence to know and share workload deployments with each other. When one team member kicks off a deployment and executes a pipeline, others can see what’s happening with that workload in real-time.

We described previously that CI driven pipelines are an anti-pattern that @errordeveloper termed CIOps. Problems with CI based pipelines = “CIOps”: 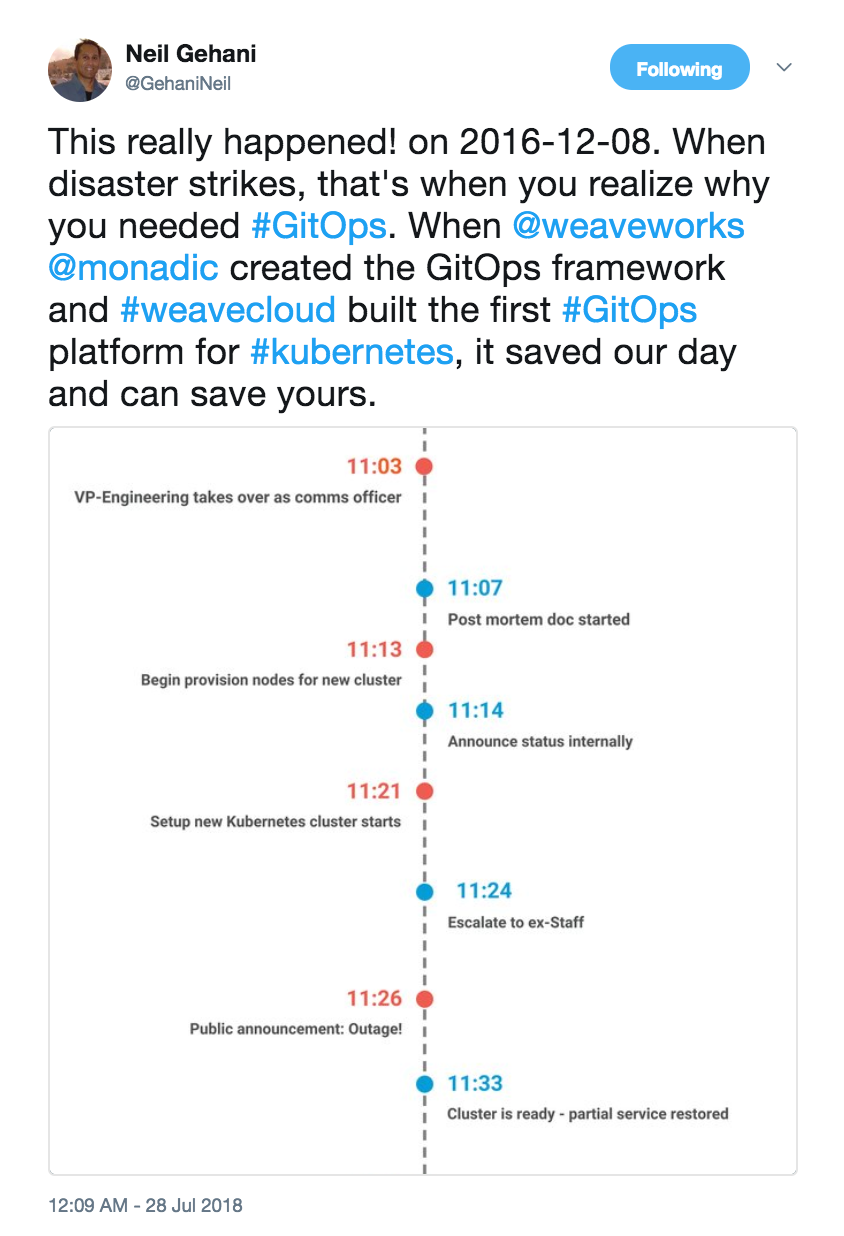 GitOps CD Pipelines to the rescue

Weave Cloud implements GitOps by using a Kubernetes operator inside the cluster that detects when the source of truth is different from the current state. GitOps CD Pipelines solve many of the problems with CI based pipelines, but CD pipelines are also not without its challenges:

The stages of a pipeline can be very simple or they can be complex. It can be just a few stages or many stages. Workloads may be deployed to a single cluster or to many clusters or multiple clouds either in parallel or in sequence.

How Promotion works in Weave Cloud

Promote your workloads from the Image Repo to a Cluster:

Promoting workloads from one cluster to another

This is a two step process:

Step 1: Deploy from Image Repo to a Cluster (Dev or Stage)

Step 2: Promote from one cluster to another (Dev to Stage, or Stage to Prod)

Give it a try at cloud.weave.works