This post shows step by step how to set up a multi-cloud environment for big data processing using Apache Flink, Docker Swarm and the new Weave Net Docker plugin.

This is a guest post from Thalita Vergilio, a Java developer interested in multi-cloud architectures, design patterns, container orchestration and big data processing. She is currently studying for a PhD at Leeds Beckett University.

In this post, I would like to share my experiences of setting up a multi-cloud environment for big data processing using Apache Flink, Docker Swarm and the new Weave Net Docker plugin.

The idea is to approach big data processing from a cloud consumer’s perspective, and to enable distribution and scalability down to service level – or even down to code level. Frameworks such as Flink provide the ability to break down data processing into smaller parallelisable units which are distributed across different nodes for processing. Deploying these nodes to the cloud has, due to the cloud’s elasticity, the advantage of being able to easily scale the resources up and down. Even better, distributing the nodes across different clouds lowers the risk of vendor lock-in and allows the cloud consumer to pick the most cost-effective way of scaling up their resources.

Set up the nodes

Create virtual machines in two different clouds. I used Microsoft Azure and Google Cloud, followed the Specification above, and created the nodes as follows:

Docker CE needs to be installed on all nodes.

TheWeave Net Docker plugin needs to be installed on every node to create the multi-cloud network.

Weave Slack channel was the place to go. The Weave team advised me to set up Weave Net by following the instructions on this page. This needs to be done on every node.

At this point, if you run ‘weave status peers’, you should be able to see all the nodes networked.

In the Swarm Manager node:

In each Worker node:

The ‘--advertise-addr’ is important. Without it, it will only work in a single-cloud setup.

Create the Network and the Services

I am using a customised Flink image which sets the ports used by the Task Manager to known values. The default behaviour is to assign a free port at runtime, which didn’t work in this case, since the ports need to be explicitly exposed.

The image I created is available on Docker Hub: https://hub.docker.com/r/tvergilio/docker-flink/

Create the services in the Swarm Manager node:

Scale the ‘taskmanager’ service, so one is deployed to each node:

You should be able to inspect your Task Manager services:

I have used Apache Beam to create a simple Big Data processing pipeline. Apache Beam adds another layer of separation to the architecture, as it decouples the processing code from the Big Data framework used to run it. In this case, Flink is being used to run the Beam pipeline, but it could as easily have been Spark or Google Dataflow.

I will leave the details of the Beam implementation for another post. To put it briefly, the processing code I wrote captures real-time data posted to a Kafka topic, divides it into sliding windows of 5 minutes, starting every minute, then processes the data window by window. It outputs the results to a different Kafka topic.

While working on this project, I was given a free trial of the Weave Cloud service offered by Weave. I must say, once you have all your nodes set up and configured, it is a very nice visual tool for monitoring and managing your swarm.

You can see all your nodes connected and talking to each other: 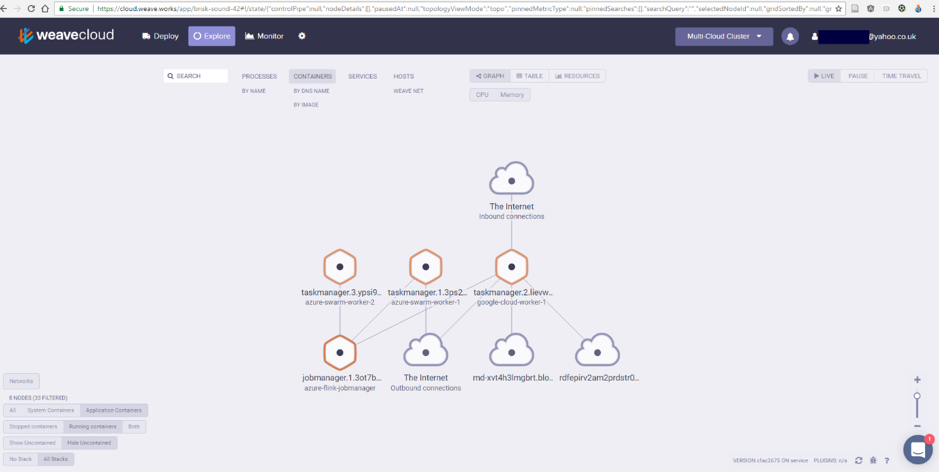 The Containers view was particularly helpful once I started scaling up my services. 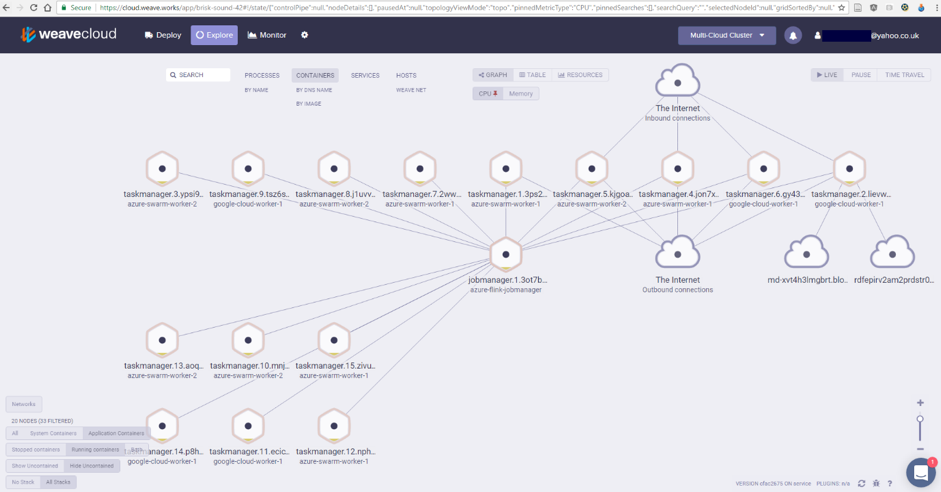 I would like to sincerely thank the Weaveworks team for all their help and support with my countless networking issues during the development of this project. You guys are awesome, and your plugin is just what was missing from Docker Swarm.

This work made use of the Open Science Data Cloud (OSDC) which is an Open Commons Consortium (OCC)-sponsored project.

Cloud computing resources were provided by a Microsoft Azure for Research award.