We’re very happy today to give the spotlight to Kai Davenport, who has been advancing the state of the art of Docker extensions, and weave, with his project powerstrip-weave. –Michael Powerstrip-Weave: A Docker Networking Extension In this...

We’re very happy today to give the spotlight to Kai Davenport, who has been advancing the state of the art of Docker extensions, and weave, with his project powerstrip-weave.

In this post I will discuss the inner workings of powerstrip-weave – a way of composing weave with other docker extensions.

The tool that enables this composition is powerstrip, a project by ClusterHQ, the makers of docker data management tool Flocker.

The discussion surrounding docker and how to extend it has created much buzz (and some consternation) in recent months.

There is recognition that solutions to the following problems are needed in order to run a multi-host docker cluster:

The phrase batteries included but removable hints at the idea that an ecosystem of extensions, authored by members of the community, is what we should be aiming for.

This leads us to powerstrip – a tool for prototyping docker extensions.

Powerstrip allows a single docker host to trigger multiple “adapters” that can hook into ANY of the standard docker API calls.

An adapter can hook in before a request arrives (a “pre-hook”) and after a response is received (a “post-hook”). This allows an adapter to modify or react to any part of a container’s life cycle. 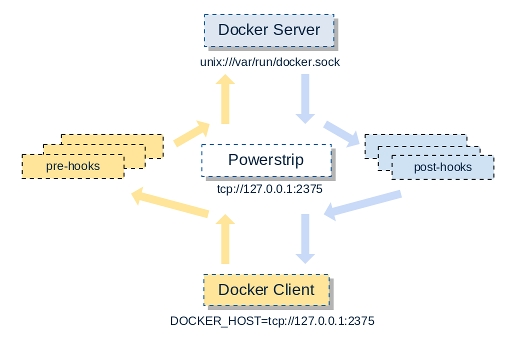 powerstrip is a docker proxy

powerstrip presents a docker proxy meaning the vanilla docker client (and by extension a whole range of orchestration tools) can communicate with it.

powerstrip intercepts and can modify HTTP requests (like POST /containers/create) both to and from the docker server.

pre-hooks allow an adapter to modify docker requests before they reach the docker server. This is useful because an adapter can (amongst other things):

post-hooks allow adapters to intercept docker responses before they are returned to the docker client. This is useful because an adapter can (amongst other things):

weave currently “wraps” Docker. This means that when a call to weave run is made – it will internally call docker run and then attach an IP address to the container once it has started.

This can be seen by this diagram:

Firstly, weave run is passed the CIDR notation of an IP address followed by the arguments that are passed to the docker run command.

Secondly, the docker container is started (in detached mode) by passing any arguments that followed the weave IP address. The $CONTAINER_ID returned by docker is grabbed by weave.

Finally, weave will give the container an IP address on the weave network.

The flow of events above means there is a small amount of time during which the container is not connected to the weave network (the time between docker run and weave attach), and that the weave-connected container cannot be run in the foreground.

These can cause problems for some containers and without changes to docker itself, they are difficult to solve.

What if there was a way to run a container but tell it to WAIT until the weave network was connected before actually running?

Well it turns out that this is exactly what powerstrip-weave is designed to do. A “pre-hook” hijacking the entry-point of a container and a “post-hook” triggering weave attach means we can have weave containers waiting until they are connected before running.

Here’s how to try it out.

First we must get everything up and running – this includes:

NOTE – the following example presently works on ubuntu. RedHat and CoreOS will work when this issue has been solved (pull requests welcome!)

Finally we start the powerstrip server itself:

Now we can run a container using the standard docker client that will auto-assign a weave IP address and wait for it to be connected before starting the process:

Notice how we pass an environment variable WEAVE_CIDR to the container we are running. This tells powerstrip-weave the IP we want the container to have.

You should see that the output reports that the network took zero seconds to connect and that the ethwe interface has an IP address of 10.255.0.51.

The following is a breakdown of how powerstrip-weave pulls off this feat.

On start up – powerstrip-weave will start a container called weavewait.

This is from the binocarlos/wait-for-weave image which is a golang program that will block until the weave network is connected. Once the weave network connects, it will execute whatever is passed as arguments as a command.

So for example – running this command:

Will output hello but only AFTER the weave network is connected.

There is a “pre-hook” that will do the following things for requests to /containers/create:

This has the effect of: 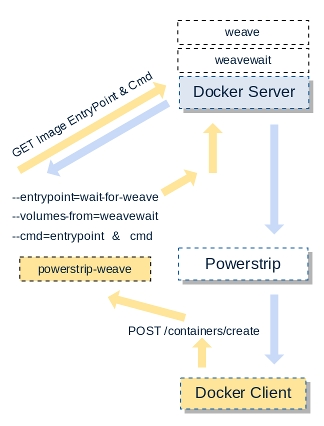 So for example – if our request to /containers/create was:

And the JSON for /images/myappimage/json was:

Then powerstrip-weave would remap the container JSON into:

There is a “post-hook” that will do the following things to requests to /containers/*/start:

This has the effect of: 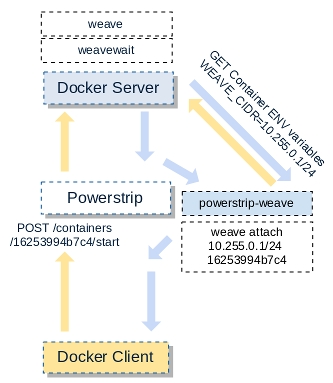 As soon as the weave attach command is run in the post-hook and the weave IP address has been assigned, the copy of wait-for-weave that is currently blocking in the container will notice the weave network and proceed to run the original entry-point.

The real thing to note is how a powerstrip adapter is combining two different stages of a docker run command (create & start) to achieve the intended outcome.

Hopefully this post has shown the power of powerstrip (pun intended).

Moving forward, if we all start developing a wide range of adapters then everyone can benefit from the freedom to choose how to compose their containers from lots of small solutions – batteries in all shapes and sizes.

Mesos, Marathon, Weave .. and Consul and Docker - Oh My

Mesos, Marathon, Weave .. and Consul and Docker - Oh My