Everyone understands how to deploy, monitor, manage and look after Linux distributions. But in the Kubernetes world, nothing is standardized. People do things with custom-built tools. What Weaveworks is doing is providing standardized workflows for how to deploy, configure, monitor, update and look after Kubernetes. Read the transcript of Steve George's interview with Swapnil Bhartiya. “We’ve spoken to a lot of quite advanced Kubernetes users who have got Kubernetes up and running. They are operating in production, but their biggest complaint is that it takes too much time and effort. Most users want to just go on with their applications deployed into Kubernetes and operate it easily,” Steve George, Weaveworks.

Everyone understands how to deploy, monitor, manage and look after Linux distributions. But in the Kubernetes world, nothing is standardized. People do things with custom-built tools. Everyone's building their own house in their own way. “What Weaveworks is doing is providing standardized workflows for how to deploy, configure, monitor, update and look after Kubernetes,” he said.

Read the transcript below.

Swapnil: We have with us Steve George. You are the COO of Weaveworks. So first of all, welcome to the show.

Steve: Thanks very much.

Swapnil: It's the first day and it's just starting. Have you seen any keynotes?

Steve: I didn't see the keynotes this morning. We were too busy. The general energy in the conference is fantastic. The KubeCon conference continues to grow. There are people here who have a lot of expertise in Kubernetes but there are also a lot of people who are new to Kubernetes and who are just exploring and trying it out. In general, the cloud native landscape continues to develop with each conference that we go to. It's still in a really exciting phase.

Swapnil: From the Weaveworks perspective, when you say, it's evolving, and it's growing, what new trends are you seeing and new customers that excite you?

Steve: The way that Kubernetes is developing as an application platform for a wide variety of different applications and users is an exciting development. A few years ago, you were looking at very in-depth users, and increasingly, we see people who want to use a general application platform, but they're not necessarily Kubernetes experts nor do they want to be.

"Whether you're deploying stateful or stateless applications, you should be able to use the whole of the cloud native infrastructure and have a general company-wide ability to deploy and run your applications."

The other thing that's changing is that people are on-premise as well as in a variety of cloud infrastructures. That whole multi-cloud story is really developing.

Swapnil: As you mentioned, new players and users are coming in, With new customers, what new challenges are you seeing with these new workloads from the new players?

Steve: Both of those aspects are happening right now. Weaveworks is focused on the workflows and the way of operating Kubernetes in production. You need to deploy infrastructure which can be multiple numbers of clusters, as well as multiple numbers of applications. You also have a variety of different teams working on that and not all of those people are going to be Kubernetes experts.

We have something called GitOps which is all about configuration management, of Kubernetes, the infrastructure and the applications using that to deploy, monitor and manage in production. So from that perspective, GitOps is the ability to get from development through to pre-production and production.

The other thing that’s changing is that people are deploying a variety of different applications and those applications bring with them more important requirements and constraints. We have a large number of enterprises that are now starting to deploy quite serious applications in production.

Swapnil: Can you explain what exactly is GitOps?

That's important because as you move faster, at some point there'll be a problem in the configuration. If you have that stored in your configuration management system, then you can go back to a previous time. It's all about disaster recovery. With the confidence to easily recover from disaster, you can move as quickly as possible.

Swapnil: GitOps is one of the many offerings. Can you talk about the other components and how they all work together to make the life of a new user or customer easier?

Steve: We see the world split into two areas. One area is for cluster operators who need to be able to deploy and operate clusters. The other area is for application development and SRE teams who need to operate those applications, monitor them and look after them in production.

We do GitOps at the Kubernetes layer that's designed for operators. This is our Kubernetes distribution. For developers and SREs, we have Weave Cloud, which is a set of tooling that helps developers and SREs to deploy their applications. Weave Cloud gives you great observability tooling and it does monitoring with Prometheus. We deliver that as a SaaS service.

If you're a development team, and you just want to develop your applications and run them in your Kubernetes infrastructure as easily as possible, you can do that with Weave Cloud. You can be running Kubernetes on AWS EKS or GCP or on-premise or in Rancher; it works with any Kubernetes. 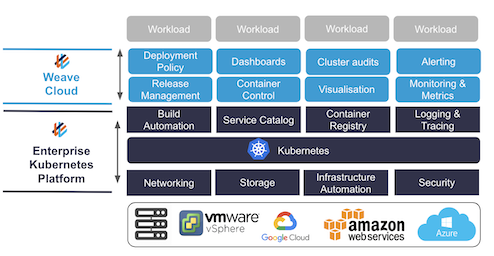 Swapnil: GitOps is a good example of solving a problem. What is the biggest problem you see right now that the Kubernetes community still needs to solve?

Steve: For us, it's more of a higher-level problem that we're trying to solve, rather than a specific technology or component. We talk to lots of advanced Kubernetes users who've got Kubernetes up and running, and they're operating in production. But their biggest complaint is that it takes too much time and effort.

We all like playing with technology and that's why we come to these conferences. But from a higher level business strategy perspective, most users want to be able to get on with their applications, deploy them into Kubernetes and operate it all very easily. That's why we have GitOps.

For us, the higher-level problem we’re solving is basically the operating model for Kubernetes. If you think back to an earlier time with Linux, everyone understood how to deploy, monitor, manage and look after Linux distributions. But in the Kubernetes world, those things are not standardized. People use their own hand-built tooling. Everyone is building their own house in their own way.

“What Weaveworks is doing is providing standardized workflows for how to deploy, configure, monitor, update and look after Kubernetes” -- Steve George, Weaveworks

Swapnil: You may choose to not answer this question, but I ask everybody this. We're here at a tech conference and I want to lighten the mood a bit. When you get free time from work, what do you do?

Steve: I'm really into mountaineering. That's actually my main hobby, I spend a lot of time in the French Alps.

Swapnil: Thank you Steve for talking to me today and I look forward to seeing you again.

View the interview in its entirety here: