We won’t forget you, DockerCon USA 2017. Our team had a blast – huge thanks to the Docker ecosystem and the entire community. In case you missed it, here’s a recap of our awesome week in Austin. The big newsWe’re excited about two of... We won’t forget you, DockerCon USA 2017. Our team had a blast – huge thanks to the Docker ecosystem and the entire community. In case you missed it, here’s a recap of our awesome week in Austin.

We’re excited about two of Docker’s big announcements during the show: the Moby Project, which provides a library of components and a framework for assembling them into custom container-based systems; and LinuxKit, a toolkit for building custom minimal, immutable, Linux distributions.

Find out how the Weaveworks team collaborated with Docker to get Kubernetes working with LinuxKit – sign up for the Weave User Group session: “Docker Linux Distributions that work with Kubernetes: LinuxKit w/ Justin Cormack“. Docker’s Justin Cormack will lead the demonstration April 25, so don’t miss out!

Presentations and Birds of a Feather 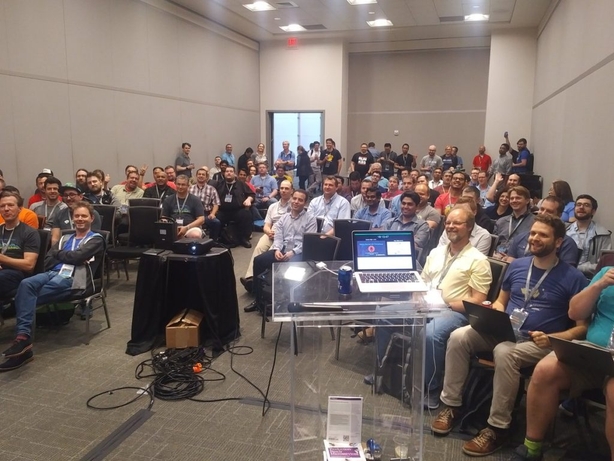 We had a lot of beer, food, and fun at our BoF meetup. During the meetup, Luke expanded on his Prometheus session from the previous day that covered Weaveworks’ journey to get Prometheus working with Docker Swarm. Luke shared just how Weaveworks uses Prometheus to troubleshoot and iterate faster. Julius Volz, Prometheus founder, was there chat about non-SQL query languages.

We even put on (possibly) the geekiest pub quiz or all time.

Shout out to Abby Fuller and her presentation “Creating Effective Images” which the Docker community deemed one of the best presentations of the event (she even got a cool Moby award). Abby is a Software Engineer and Technical Evangelist at AWS. She’s also a regular presenter for our Weave Online User Groups.

Our guest of honor

You may remember we gave away a full conference pass to DockerCon. Our lucky winner, James Strong, stopped by the booth to chat with us, and of course score some Weaveworks swag. We hope he had as much fun at the event as we did hosting him.

Our coveted CubieSwarm – a 5-node Docker Swarm cluster running on Cubieboard2s created by our very own Tom Wilkie – has a new home. Many of you entered, but there could only be one winner. Dhruv Chandna pledged from day 1 that he’d be the new owner:

For everyone who entered to win the CubieSwarm, we loved your selfies, and we hope you’re all inspired to experiment with your own ARM Docker deployments!