What is Gitops? If you've ever what GitOps actually is, this article is for you. Get a concise definition of GitOps with comparisons and examples.

A year ago we published an introduction to GitOps - Operations by Pull Request. This post described how Weaveworks ran a complete Kubernetes-based SaaS and developed a set of prescriptive best practices for cloud native deployment, management and monitoring.

The post was popular.  Other people talked about GitOps and published new tools for git push, development, secrets, functions, continuous integration and more.  Our website grew with many more posts and GitOps use cases.  But people still had questions.  How is this different from traditional infrastructure as code and continuous delivery?  Do I have to use Kubernetes?

We soon realized that we needed a new jumping off point, with:

This blog provides that. Read on for an updated introduction to GitOps, CICD and Developer Experience. We focus mainly on Kubernetes although the model may be generalized.

A Story of GitOps

Imagine Alice.  She runs a business “Family Insurance” that sells health, travel, car and property insurance packages to parents who are too busy to figure out the details by themselves.  The business began as a side project when Alice was working as a data scientist in a bank and she realized she could use advanced data algorithms to analyse and assemble family packages more efficiently than by hand.  Some investors funded the project and now the business turns over $20M per year and is growing fast with 180 staff in a variety of roles.  Among those is a technology team that builds and operates the website, database and customer analytics.  This team has 60 staff and is led by Alice’s CTO, Bob.

Bob’s team run their production systems in the cloud.  Their main applications run on GKE - using Kubernetes on Google Cloud - and they use several data and analytics tools as well.

Family Insurance hadn’t planned to use containers but got caught up in the excitement around Docker.  They soon found that using GKE made it easy to set up clusters for testing new features.  They added Jenkins to provide a CI solution and used Quay for the container registry.  Then they wrote some Jenkins scripts that pushed new containers and config to GKE.

Today though, Alice and Bob are getting frustrated with the team’s velocity, and how it affects the pace of their business. Introducing containers didn't seem to improve velocity as much as the team hoped. Sometimes, deployments break and it's not clear that a code change was responsible. Config changes are also hard to track. Often they have to create a new cluster, and re-deploy their apps, as it's the easiest way to undo the kind of mess the system turns into.  Alice is worried this will get worse as the app grows, and there is a new ML project looming on the horizon.  Bob feels that he has automated a lot of manual processes - so why is the pipeline still brittle, requires manual intervention and unscalable?

Then they find out about GitOps and it enables them to move forward - faster.

Alice and Bob’s team have spent years hearing about Git-based workflows, devops and infrastructure as code.  It’s not super new.  But GitOps brings a set of opinionated and prescriptive best practices about applying these ideas in the context of Kubernetes.  There are quite a few people and vendors talking about it, including on Weaveworks’ blog.

The Family Insurance team adopt GitOps.  Now they have an automated operating model that works for Kubernetes and combines ‘speed’ with ‘stability’ because they: 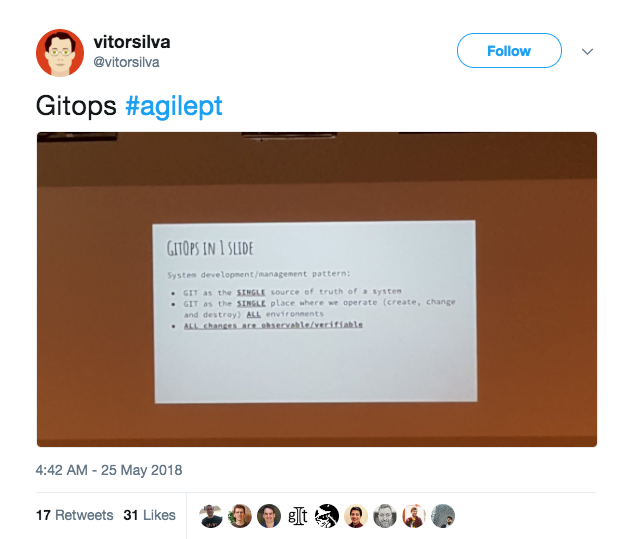 A note on Git

If you are not familiar with version control systems and Git-based development workflow, we highly recommend diving in.  Working with feature branches and pull requests can seem like black magic at first, but it is worth the effort.  Here is a good article to get you started.

In our story, Alice and Bob came to GitOps after using Kubernetes.  Indeed, GitOps has a strong affinity with Kubernetes - it is an operating model for Kubernetes-based infrastructure and applications.

What does Kubernetes give users?

Here are some key properties:

If a group of configuration updates are made by a human operator, the Kubernetes orchestrator will apply changes to the cluster until its state has converged to the updated configuration.  This model works for any Kubernetes resource and is extensible using Kubernetes Custom Resource Definitions (CRDs).  Therefore Kubernetes deployments have the following excellent properties:

Let’s go back to Alice and Bob’s microservices teams at Family Insurance.  What are some of the workflows that they want to carry out?  Have a look at the table below. If there are parts that seem new or strange, please suspend disbelief and bear with us.  This is just an example workflow using Jenkins. There are many other workflows that use alternative tools.

What we can see is that every update ends up with changes to the config files and Git repos.  These changes in Git then result in the “GitOps operator” updating the cluster.

A concise description of GitOps

2. When the desired and observed states are not the same then:

3. Hence all Git commits cause verifiable and idempotent updates in the cluster.

4. Convergence is eventual and indicated by:

To repeat: All specified properties of the cluster are also observable in the cluster.

Some examples of divergence:

What is the convergence mechanism?

GitOps lets us say: only systems that can be described and observed can be automated and controlled.

GitOps is not only about Kubernetes.  In GitOps we want the whole system to be managed declaratively and using convergence.  By a “whole system” we mean a collection of environments running Kubernetes, eg. “dev cluster 1”, “production”.  Each environment includes machines, clusters, applications, as well as interfaces to external services eg. data, monitoring.

Notice how important Terraform is for the bootstrapping problem here.  Kubernetes has to start somewhere, and using Terraform means that we can apply the same GitOps workflows to create a control plane that underpins Kubernetes and applications. This is a helpful best practice.

Applying GitOps concepts to the layers above Kubernetes is an exciting area of active development.  So far we have seen GitOps type solutions for Istio, Helm, Ksonnet, OpenFaaS and Kubeflow, as well as eg. Pulumi who are re-inventing the app dev layer for cloud native.

We said GitOps is two things:

For many people, GitOps is all about the Git push workflow.  We like this too :-)  But there is more to it: Let’s now look at CICD pipelines.

GitOps provides a mechanism for continuous deployment that removes any need for standalone “deployment management systems”.  Kubernetes does the work for you.

No kubectl, no scripts

You should avoid using Kubectl to update the cluster and especially avoid using scripts to group kubectl commands.  Instead, with a GitOps pipeline in place a user can update their Kubernetes cluster via Git.

The difference between CI and CD

The modern CI server is an orchestration tool.  Specifically it is a tool for orchestrating CI pipelines. These include build, test, merge to trunk, etc.  CI servers automate management of complex multi-step pipelines.  A common temptation is to script a set of Kubernetes updates and execute that script as a pipeline step to “push” changes to the cluster.  Indeed many people do this.  However it is sub-optimal and we shall now talk about WHY.

CI should be used to merge updates to trunk, and the Kubernetes cluster should update itself to manage CD “internally” based on those updates.  We call this the “pull” model for CD in contrast to CI “push”.  CD is part of runtime orchestration.

Don't use a CI server to orchestrate direct updates to Kubernetes as a set of CI jobs.  This is an anti-pattern as set out in this blog post.

Let’s go back to Alice and Bob.

What kind of problems did they encounter? Bob’s CI server is applying changes to the cluster, but if it fails, then Bob doesn't know what state the cluster is in, or is supposed to be in, or how to rectify it.  This is also true if it succeeds.

Let’s assume that Bob’s team built a new image and then patched their deployments to deploy the image, all from a CI pipeline.

If the image builds OK, but the pipeline fails, the team is left to figure out:

Using Git-based workflows doesn't guarantee that Bob’s team will not encounter these problems. They could still fail to push a commit, or move a tag, or whatever; but, it's much closer to being a clear pass-or-fail.

In summary - the reason CI servers should not do CD is:

NOTE on Helm:  If you want to use Helm, we recommend combining it with a GitOps operator, eg. Flux-Helm.  This will help with convergence. Helm itself is not deterministic or atomic.

GitOps is the best way to do Continuous Delivery for Kubernetes

Alice and Bob’s team adopt GitOps and find that it is much easier to deliver their products, at high velocity and without losing stability.  Let’s finish this blog post with some illustrations of what their new set-up looks like.  Note that we are talking below about applications and services primarily, but you can also use GitOps to manage the whole platform.

Please review the following diagram.  This shows Git and the container image repository as shared resources between two orchestrated lifecycles:

What are the key takeaways? 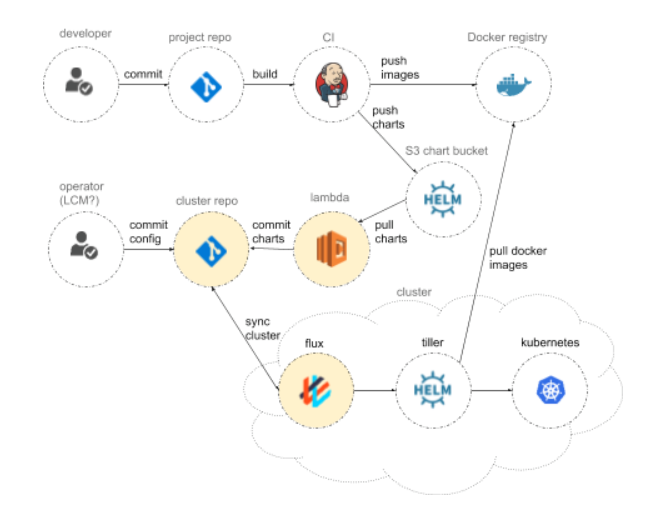 GitOps provides strong update guaranties which should be required of any modern deployment of “CICD” tool:

This is important because it provides an operating model for developers in cloud native.

Imagine having many clusters deployed across many clouds, and many services each with their own teams and deployment plans.  GitOps provides a scale invariant model for managing all this.

Get Started or Find Out More

To find out more you can: