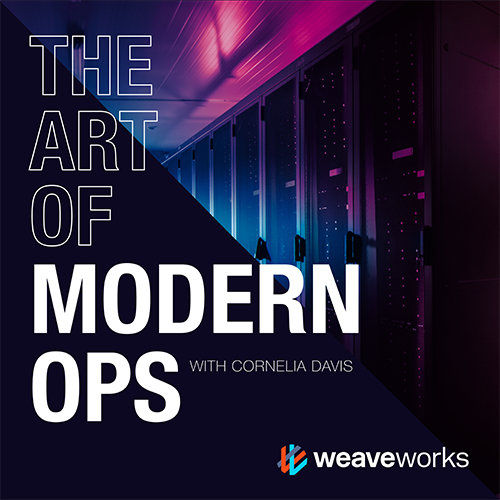 Welcome to the Art of Modern Ops - a podcast series on modernizing cloud infrastructure; hosted by Cornelia Davis, Weaveworks CTO, and author of the book Cloud Native Patterns. Through a series of interviews with both visionaries and practitioners, she discusses hands-on use cases with those who have completed the digital transformation and others still in transition.

Ep. 9: Z System in the Age of DevOps: When Eventual Consistency is Not an Option

Anyone who looks at the growth of Kubecon CloudNativeCon attendance over the past four years can recognize that Kubernetes is more than a passing fad. Instead, Kubernetes represents the way forward for companies to scale, go faster and be more competitive. Many question whether we’ve achieved ‘peak Kubecon’.


Listen in as Cornelia Davis and Liz Rice discuss the current state of cloud native, its ecosystem of projects and how the CNCF can help you navigate the complexity of piecing together a Kubernetes solution that’s right for your team.

Ep.2: Is Kubernetes Ready for Specialization?

Kubernetes is often selected by organizations to meet specific requirements that can give businesses a competitive advantage. Requirements may include features involving machine learning to make real-time recommendations, to perform ‘intelligent queries’ or they may be needed for real-time, on-site data processing like that available from Edge infrastructure setups. In this episode of the Art of Modern Ops, Cornelia Davis, Weaveworks CTO and Cody Hill, Packet Field CTO explore what this type of Kubernetes infrastructure looks like in practice.

Ep.3: Carving out a Cloud Native Culture in Established Organizations

It’s been said that the process of building software is as much about people as it is about writing the code. According to a recent survey conducted by the CNCF, 43% of respondents indicated that cultural changes were a top challenge.

The success of implementing cloud native technology and DevOps best practices into your organization depends a lot on your existing company culture. Internal teams must not only learn to adopt cross-functional methods that ensure software is iterated on with a continuous cadence but that it also complements the business goals.  Making the actual switch to a cloud native technical solution may be the simplest part in your journey; but how you get to that technical solution, and propagating that throughout your organization could well be the most difficult part of the process.

Ep. 4: Is Envoy a Service Mesh or a Platform?

Lyft migrated their single monolithic service to 300+ microservices with their internal proxy and API gateway, called Envoy. Knowing that many other organizations will have faced similar problems to Lyft, Envoy was open sourced and later donated to the CNCF where it recently graduated to production ready status alongside Kubernetes and Prometheus.

In this episode of the Art of Modern Ops podcast, Matt Klein, Lyft Software Engineer and Cornelia Davis Weaveworks CTO discuss the history of Envoy and how it was originally used as an API gateway and how it differs from a purpose-built service mesh.

The Art of Modern Ops · Is Envoy a Service Mesh or a Platform?

In this thought-provoking conversation Cornelia Davis of Weaveworks and Matt Asay of AWS explore the history of the open source movement, and examine the motivating factors that have driven consumers to increasingly insist on open source.

Arguably launched by the success of Linux as an open source project, the shift has driven technology providers to include open source software as an integral component of an enterprise-wide technology strategy. A few defining moments led to this explosion of available open source projects, as well an increase in trust shown by the number of companies who have built businesses around open source. Matt has spent virtually his entire career experiencing these shifts first hand, and we think you’ll agree, that he brings a wealth of fascinating insights to the open source conversation.

Cornelia Davis and Steve Wade take a look at GitOps, DevOp and the metrics used to measure your progress as a newly formed DevOps team. Steve Wade is the platform lead at Mettle, a fintech company in the UK that provides free digital business accounts that can help small businesses and the self-employed start, run and grow their business.

Steve thinks about DevOps in terms of a process rather than a technology. DevOps to him is using automation to eliminate waste from development and platform management cycles. In addition to this it can be thought of as a type of systems engineering that when done effectively, enables information sharing across all business units. But to close those information gaps across an entire company, you need to make iterative improvements that can be easily measured and improved upon. Once you’ve identified those improvement areas the entire organization is propelled towards a much higher velocity.

BlackRock is one of the largest investment companies in the world. With a 30-year history and an impressive performance, the company does not shy away from the latest trends in cloud native infrastructure. In just 100 days, the BlackRock platform team managed to roll out a full production Kubernetes environment and released a more modern version of Aladdin, their internal investor research app.  Mike Bowen, Director of Open Source discusses the challenges and benefits of Kubernetes and other cloud native tooling in a regulated environment like Blackrock.

The Art of Modern Ops · Kubernetes in Highly Regulated Industries

Ep. 8: Buzzword Bingo - What do you really need for Kubernetes?

It seems like every day there is a new OSS project that promises to solve all the things. In this episode, Cornelia Davis, CTO at Weaveworks and Kelsey Hightower, Developer Advocate at Google cut through the hype with the essential patterns needed to run Kubernetes in production.