Automation and Deployments for Kubernetes

As the creators of GitOps, we help teams adopt and manage cloud-native infrastructure and applications quickly, securely, reliably, and at scale. Through our GitOps solutions, we enable infrastructure, and application development  teams to build and operate their own Kubernetes application platform whether in the cloud, at the edge, or on-premise.

Our products and solutions are community-built and enterprise-approved. Weaveworks was one of the first members of the Cloud  Native Computing Foundation and is one of its top 10 contributors. Weaveworks is also a key partner with Microsoft Azure providing support for Flux in Microsoft GitOps deployments.

Why Automate your CI/CD Pipeline?

Automating Continuous Integration and Continuous Delivery (CI/CD) in a development environment is the ultimate goal for DevOps teams. Automation allows new features to be tested, deployed and delivered to your customers much more quickly. The ability to deliver more, faster, not only gives you a competitive advantage but it also leaves more time for innovation within your organization; and since adjustments and updates are rolled out rapidly, your customers will also be happier.

On this page we’ll take you through:

Kubernetes allows you to update your applications in real-time, otherwise known as rolling updates, but doing so manually is not ideal for a number of reasons:

Learn how to automate Kubernetes infrastructure and deployments in this whitepaper, "Automating Kubernetes with GitOps".

Standing up a Kubernetes cluster today is a rather straightforward operation, but what isn’t so simple is getting your updates or new features rolled out to your running cluster. There are a number of options available that can help you automate a continuous delivery pipeline to Kubernetes without you and your team having to manually deploying changes.

These are the components that make up a Continuous Delivery (CD) pipeline:

The key to Continuous Delivery is to coordinate and automate these pieces to increase velocity and make Kubernetes deployments seamless.

Most developers use Git for version control, and you may also be using an automated testing and integration service like Jenkins, Travis or CircleCI—any of these CI systems are capable of running through a set of tests and even building a Docker image.  Once tested and sanitized, the newly built image is sent to a container repository: either a public one like Google Container Registry (GCR), or to Quay or Docker Hub; or you may have an on-premises private registry.

At Weaveworks, we’re advocates of the GitOps methodology that puts Git as the catalyst for the pipeline. Git is the source of truth for declarative configuration for Kubernetes, deployments manifests as well as source code. When a developer makes a code change and pushes it to ‘git’ or any other Version Control System, it triggers the deployment pipeline.

We’ll discuss this in more detail later on this page.

In addition to the basic components, you may also need to support additional features like blue-green deployments and canary testing.

A blue-green deployment is when you run two identical deployments in parallel: one on production and another on a staging server. You can then carry out final testing on one server and afterwards switch the live server over to the tested version. If you need to rollback at a later point, for some reason, this deployment strategy allows you to do that quickly and without much downtime. 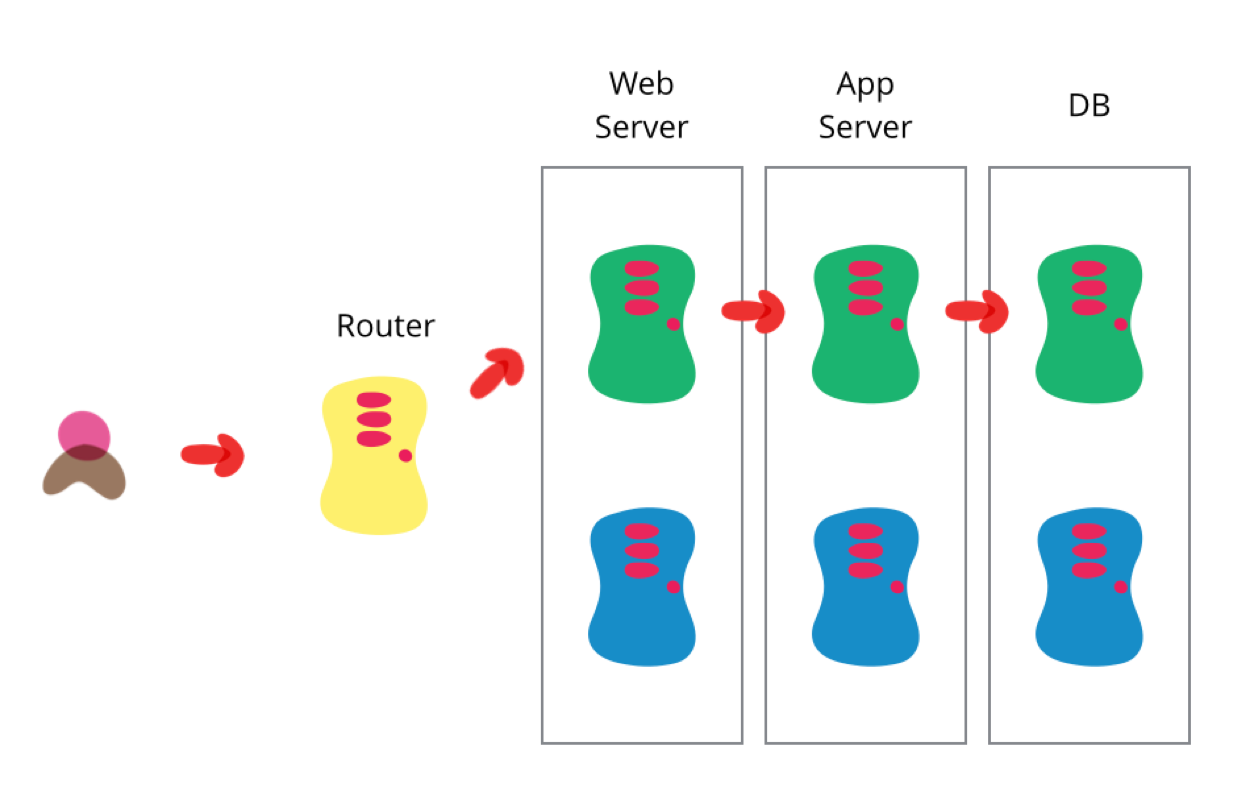 Canary deployments are used when you want to test out a new feature with a subset of users. Similar to a blue-green deployment, you might have two almost identical servers: one that goes to all users and another with the new features that gets rolled out to only a set of users. These types of deployments allow you to test new features with a trusted sub-set users to ensure that you’re building the right product.

3. Approaches to Continuous Delivery to Kubernetes

Even though there are a number of tools available, CI/CD vendors are still in the process of defining how a CI/CD Kubernetes pipeline can and should look like for engineers who create cloud native applications. At Weaveworks, we see two different paradigms emerging; one is a push type pipeline and the other is a pull pattern.

Most of the CI/CD tools available today use a push-based model. What we mean by push-based is that code goes through the pipeline starting with the CI system and may continue its path through a series of encoded scripts or by using ‘kubectl’ by hand to push changes to the Kubernetes cluster.

The reason you don’t want to use your CI system as the deployment impetus or do it manually on the command line is because of the potential to expose credentials outside of your cluster. While it is possible to make those interactions secure in both your CI/CD scripts and manually on the command line, you are working outside the trust domain of your cluster. This is generally not good practice and is why CI systems can be known as attack vectors for production.

Weave GitOps, on the other hand, uses a pull strategy and it consists of two key components: a Deploy Automator that watches the image registry and a Deploy Synchronizer that sits in the cluster to maintain its state.

At the centre of our pull pipeline pattern is a single source of truth for manifests (or a config repo). Developers push their updated code to the code base repository; where the change is picked up by the CI tool and ultimately builds a Docker image. The Weave GitOps ‘Deploy Automator’ notices the image, pulls the new image from the repository and then updates its YAML in the config repo. The Deploy Synchronizer, then detects that the cluster is out of date, and it pulls the changed manifests from the config repo and deploys the new image to the cluster.

Weave GitOps uses the deployment operator pattern to listen for and orchestrate service deployments to your Kubernetes cluster.

This approach is described by William Denniss in our KubeCon presentation.  By using the operator, an agent acts on behalf of the cluster to listen to events relating to custom resource changes, so they can be applied consistently.  In other words, the operator is responsible for synchronizing what’s in Git with what’s running in the cluster. 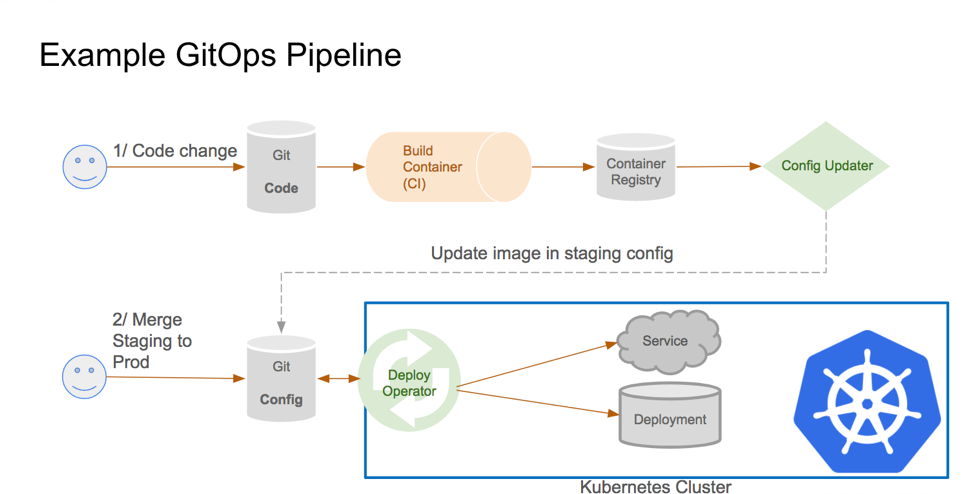 The operator deployment method is implemented by Flux, a CNCF open source project.

The benefits of a pull-based pipeline:

Leverage GitOps best practices to automate and manage Kubernetes deployments and configuration. This whitepaper discusses in depth why GitOps is a fast and secure method for developers and cluster operators to manage and maintain complex applications at scale.