Weaveworks is the creator of Weave Cloud, a SaaS, that simplifies deployment, monitoring and management for containers and microservices. It extends and complements popular orchestrators, and enables developers and DevOps to make faster deployments, insightful monitoring, visualization and networking. We’ve been operating Weave Cloud, with Kubernetes, Prometheus and Docker in production on AWS for the past two years. 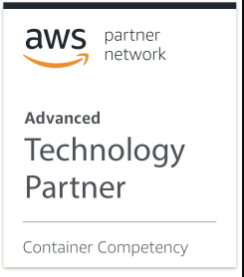 In addition to this, we are AWS technical partners; major contributors to the Kubernetes Open Source project; originators of the Kubernetes on AWS SIG; and we’re also key members of the SIG Cluster Lifecycle.

With our experience, we can help you navigate the challenges of running Kubernetes on AWS. We’ll help you select the right Kubernetes installation distribution based on your needs and we’ll identify the issues to avoid after you’ve made your selection.

Cloud Native is open source cloud computing for applications—a trusted tool kit for modern architectures. Weaveworks is a founding member of the Cloud Native Computing Foundation (CNCF) and we believe the future is cloud native.

We use Docker containers and manage them in Kubernetes clusters for all of the same reasons that have led you to containers and Kubernetes. Containers are lightweight, portable and they allow you to make fast incremental changes, which ultimately provides more value more quickly to your customers—even more so if you’re using a microservices-based architecture.

If you’re managing those containers with Kubernetes—a project started and used by Google—you know that you can easily scale your application without having to worry about rebuilding the cluster.

As developers we like that mostly hands-off approach. We’d rather spend our time coding without having to worry too much about the infrastructure on which it runs. The more we worry about infrastructure, the fewer features we produce and this is generally not a good thing in today’s competitive landscape.

But Why Run Kubernetes on AWS?

When you’re installing Kubernetes on AWS, these are the services that you will need to be familiar with. In each section, we describe what you need to know when you’re configuring a cluster.

But before we get into the details of each Amazon service and how they apply to Kubernetes, it is useful to have some familiarity with the Kubernetes architecture and its parts. See the interactive tutorial,  “Kubernetes Basics” for a good overview.

If you are interested why we chose Kubernetes and AWS for our own SaaS service Weave Cloud - watch our recent webinar on demand "Kubernetes and AWS – A Perfect Match For Weave Cloud". Listen in as we are discussing best practices and pitfalls that we have learned over the past 18 months.

For those of you who don’t want to manage every aspect of Kubernetes yourselves, you can use the Amazon Elastic Kubernetes Service (EKS). This hosted EC2 service takes away most of the heavy lifting of manual configuration so that you can easily run Kubernetes on AWS by providing:

For an easy and quick installation of Kubernetes on AWS try the open source tool eksctl and with only one command have a fully functional Kubernetes cluster running in AWS’ EKS in minutes.

To monitor your applications running in Kubernetes on EKS, you can use Weave Cloud which integrates with and extends AWS’ CloudWatch to take advantage of Weaveworks’ hosted Prometheus monitoring. See, “Monitoring Kubernetes with Prometheus” for more information on why Prometheus is the defacto monitoring solution for Kubernetes.

Amazon Virtual Private Cloud (VPC) service lets you provision private, isolated sections of the AWS Cloud and then launch AWS services and other resources onto a virtual network. With a VPC you can define your own IP address range and have complete control over your virtual networking environment, including subnets, and route table definition as well as network gateways.

One of the concepts that may be confusing is the networking. There are a few different networks that you need to be aware of when you’re running Kubernetes in AWS.

Pods are collections of containers with shared storage/network with a specification for how to run the containers. Pods are generally co-located, and co-scheduled and they run in a shared context. This means that containers within pods share an application model and can also share components through local volumes between related services within an application. Each pod has its own IP that are managed and scheduled by the Kubernetes master node.

But pods between EC2 instances need a way to communicate with each other.  The VPC itself provides support for setting routes through the kubenet plugin (deprecated as of 1.8).  This is a very basic Linux networking plugin that provides near-native performance throughput for your cluster but it lacks other advanced features such as extensive networking across availability zones, the ability to enforce a security policy and also when using a VPC, you cannot effectively network the cluster since it uses multiple route tables. This is why many people resort to using CNI plugins -- an open standard for container communications.

Container Network Plugins (CNI) for Kubernetes provide a lot more features than the basic `kubenet linux` networking plugin does. While you do lose some performance with a CNI overlay network, you gain other things like being able to set security policy rules between your services as well as the ability to connect nodes and pods between high availability (HA) zones if you have a cluster that is larger than 50 nodes.

During installation you can specify which CNI plugin you want to use for the pod network. There are several network plugins available: Weave Net (and specifically for EKS) Calico, and Flannel and others.

For a good discussion on CNI, why you need it and a comparison of the different CNI providers, see “Choosing a CNI Network Provider for Kubernetes”.

Out of these plugins Weave Net is the best option for a number of reasons.  See “Pod Networking in Kubernetes” for more information.

Weaveworks is part of Amazon Web Services’ network of partners that offer alternative CNI plugins for Elastic Kubernetes Service (EKS). Learn more about how to configure Weave Net with EKS. 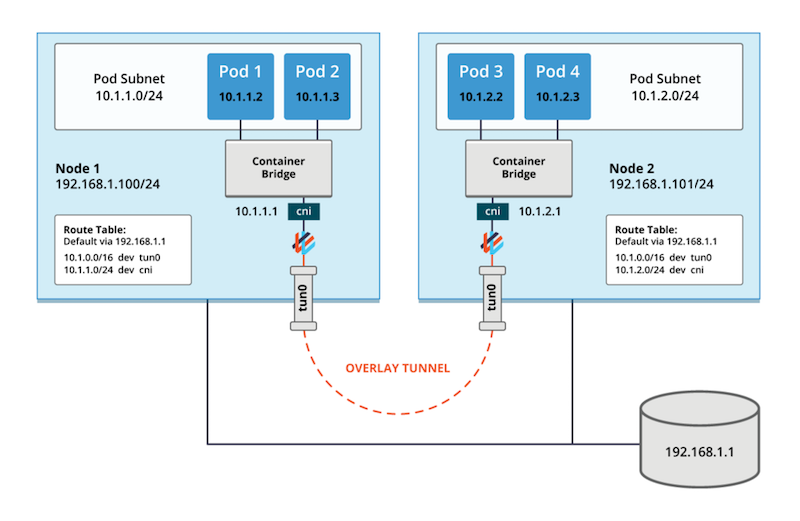 Amazon Elastic Compute Cloud provides scalable secure instances within a VPC.  You can provision a virtual instance with any operating system by choosing one of the many Amazon Machine Images (AMIs) available or create your own AMI for distribution and for your own use.

When creating instances for your cluster you’ll need to think about the size of the nodes. Even though Kubernetes automatically scales and adjusts to a growing app, the resources set for any EC2 nodes you initially create are static and they cannot be changed afterwards.

Scaling nodes is not supported through Kubernetes’ command-line interface, `kubectl` in AWS. If you need to use Kubernetes autoscaler, then you’ll need to do it manually through the AWS with the Autoscaling Group feature or you can also manually create a set number of EC2 nodes to achieve the same result.

Kubernetes clusters need DNS so that the worker nodes can talk to the master as well as discover the etcd and then the rest of its components.

When running Kubernetes in AWS, you can make use of Amazon Route 53 or you can run an external DNS.

If you will be running multiple clusters, each cluster should have its own subdomain as well.

There are basically two design patterns in AWS where you may need load balancers:

For more information about finding and exposing an external IP for Kubernetes see the section below on  How to Define Ingress and for more in depth information refer to the topic, Publishing Services in the Kubernetes documentation.

How to Define Ingress in AWS

Ingress is not a service in AWS and its rules must be defined separately for any of your app’s services that need to be exposed to the outside world.

Setting up Ingress in AWS involves the following:

When running Kubernetes on AWS, there are a few different ways to handle ingress:

Related to ingress is the ability to specify a security network policy for every service available in a pod and whether it’s accessible to the outside world or to another service.

If you are using Weave Net as your CNI pod networking layer, then you will have a Network Policy available to you, and when configured, Weave Net will enforce that policy. Network policies are very easily specified in the kubernetes deployment manifests (YAML files).

Sometimes pods need persistent data across volumes. For example if some of your containers are MySQL databases (or any databases for that matter), and they crash, having a backup for your persistent volumes ensures that when the MySQL container comes back up, it can resume where it left off.

See the discussion on volumesfor information on how Kubernetes manages data stores and Persistent Volumes for available parameters. 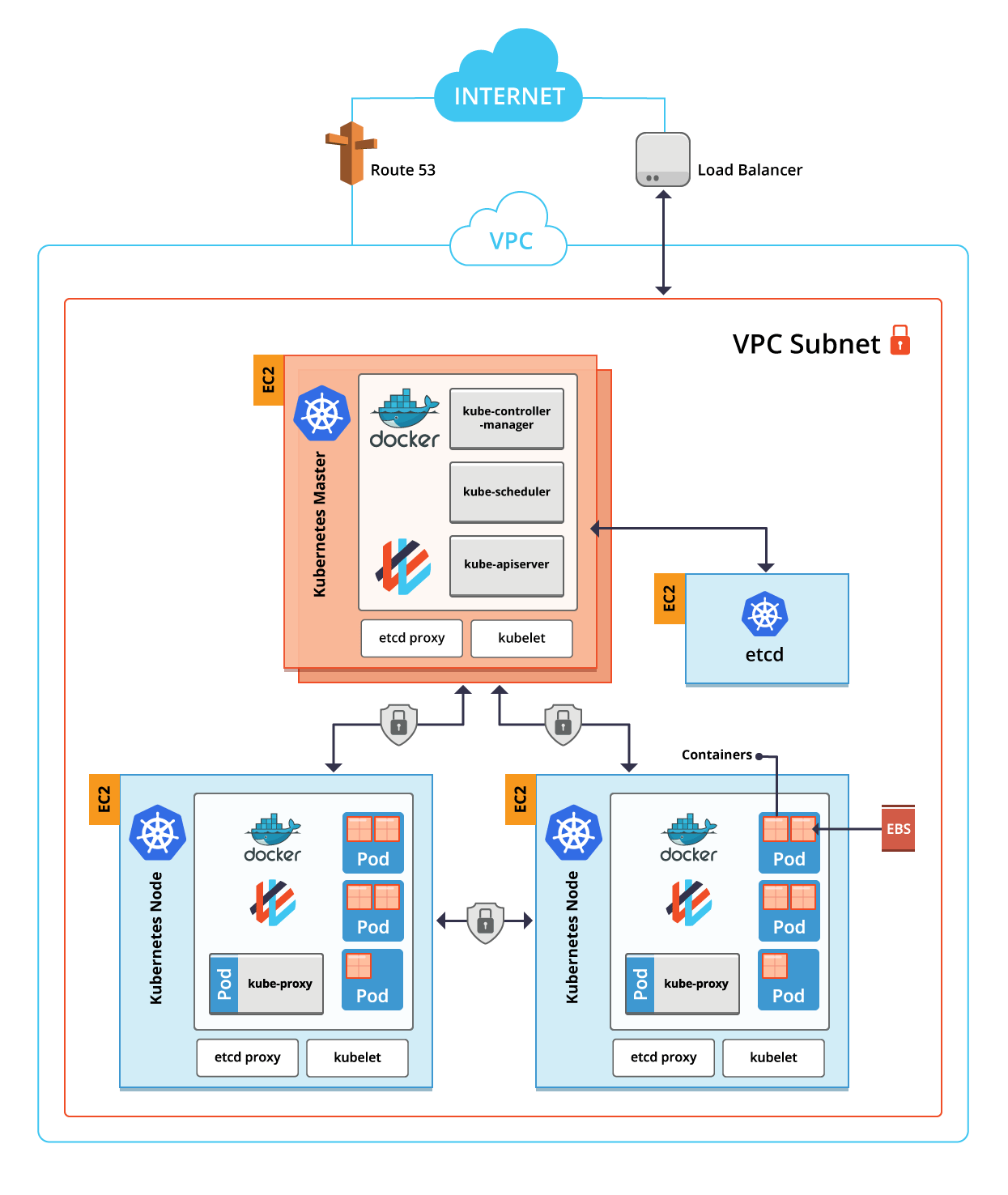 Kubernetes does not provide specific AWS IAM roles and permissions.  If you are storing and retrieving information from an S3 Bucket or from DynamoDB (calls the AWS API directly), then you will need to think about how to provide IAM permissions for your nodes, pods, and containers.  Normally you will want different IAM roles for the masters and the nodes.

You could assign a global IAM role to a Kubernetes node, where all of the IAM roles required by all containers and pods running in Kubernetes are automatically inherited. But from a security standpoint, this is not an optimal. Instead, you will need a more granular approach, one that can assign IAM roles at the Pod and the container level and not just at the node level.

There are a few different approaches to manage the AWS security requirements:

Summary of Kubernetes on AWS

At a high level, these are the issues you need to consider when running Kubernetes on AWS:

Weaveworks & AWS: What works for us Building Your Own: Kubernetes Installation Options

How do you implement a Kubernetes strategy across your organization without suppressing innovation and productivity?